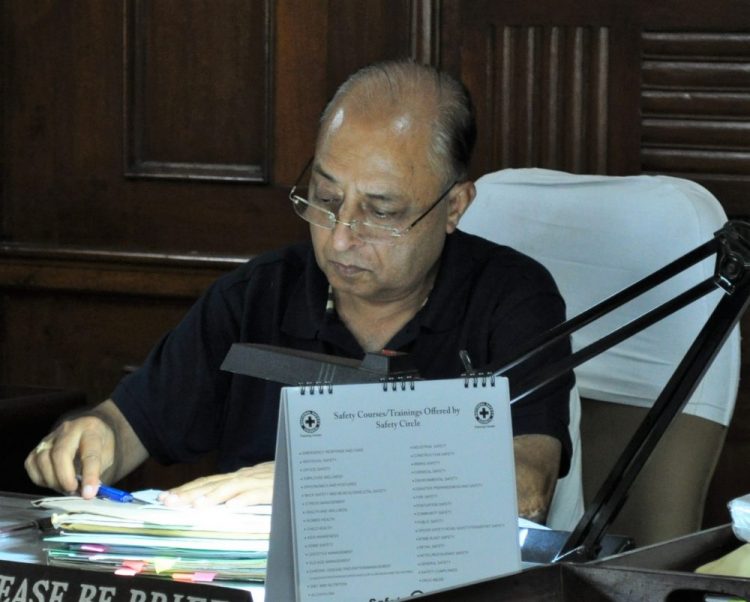 Commodore IL Syal took over the reins of The Punjab Public School as Headmaster on 14th Dec 2004. A special assembly was held in the school auditorium to welcome him. Mr. Kanwar Sandhu, Honourable Member, the Board of Governors, formally presided over the introduction and shed light on the distinguished background of the new Headmaster of The PPS Nabha.

An alumnus of the prestigious Bishop Cotton School, Shimla, Commodore IL Syal is one of the leading educationists of the country and an academic visionary. Besides two Masters degrees in English and Meteorology/Atmospheric Sciences, Pune, he holds a postgraduate diploma in Personnel Management and Industrial Relations. Comm. Syal was a trained psychologist and had served on the panel for selection of Defence Officers.

He has held the positions of Principal, Aditya Birla Public School, Renukot, Principal, Naval Academy, INS Chilka, and Principal, Sainik School, Korukonda (AP). Prior to joining The PPS, Commodore Syal had served as the Principal of Manav Sthali School, a leading public school in Delhi.

During his tenure, the school equestrian team once again bettered its own record by bagging a whopping 51 medals and prizes at the Delhi Horse Show on February 6&7, 2005. The feats of Simardeep Singh, Vattandeep Singh (who emerged champions in their respective categories) and other riders came in for special praise from Gen. J.J. Singh, Chief of Army Staff.

In June 2005, Courtsey ONA, through its Jalandhar Chapter and Capt IS Dhami (R-257,1976), three girls Jasmine Bajaj, Harsimrat Kaur Tiwana and Taranjit Kaur visited UK under Derby Youth Exchange Programme. It is organized by Commonwealth countries for the welfare of youth to explore a new side of the world. Mr Dhami was Deputy director, Youth welfare Punjab and project director ,Punjab.

Kurt Hahn – a German educationist and visionary had founded the Round Square and laid down the IDEALS as a comprehensive approach to education. In the second half of 2006, The PPS applied for its membership and was immediately accepted, as the school philosophy dovetailed perfectly with the IDEALS. The PPS became a regional member of Round Square – a network of around 70 prestigious public schools from all parts of the world sharing a common philosophy based on IDEALS – the pillars of Round Square. Students from the school regularly attend regional conferences spread evenly throughout the year at various member schools.

The school introduced the Dreams and Teams project aimed at developing young leaders and global citizens through sports and cross-cultural awareness. Dreams and Teams Mini-Festival was conducted in the school campus. Twenty-five young leaders planned the Mini-festival, christened FUNRISE – 2007, and more than 80 students from the Junior Wing participated in Statue Dance, Relay Race and Art Competition. 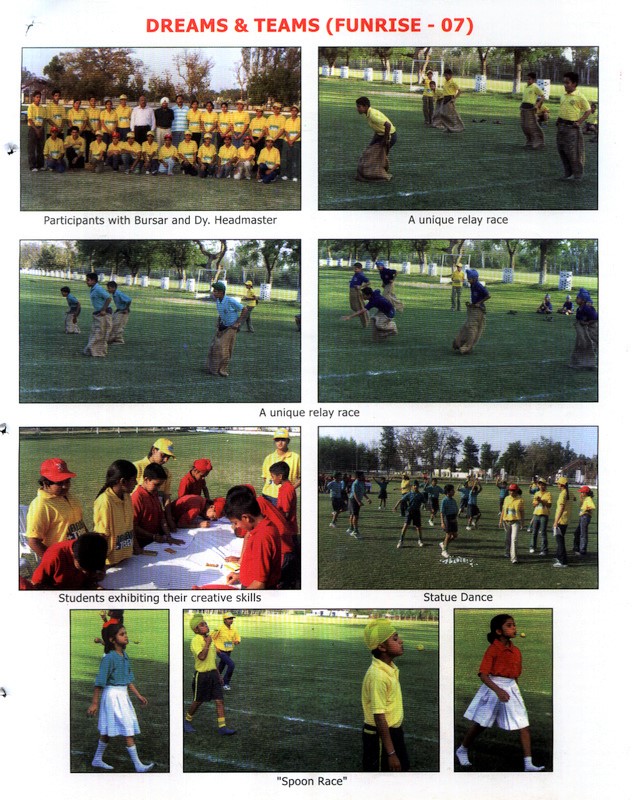 In June 2007, under Comdr. IL Syal’s helmsmanship PPS once again made a mark in high altitude mountaineering when Raghav Verma scaled Mount Deo Tibba as a member of an IPSC Expedition. It was for the first time that IPSC had organized and sponsored an expedition.

The PPS won the seventh Shri JK Kate Memorial IPSC Debate in September 2007 on “Judiciary must overrule Legislature and Executive”. Sixteen schools participated in the annual event and Justice Mr. M Kumar, Judge, Punjab and Haryana High Court, was the Guest of Honour. Namrata Majhail and Sumit Khuddian spoke with great poise and confidence and came in for special praise from the judges and guests alike. 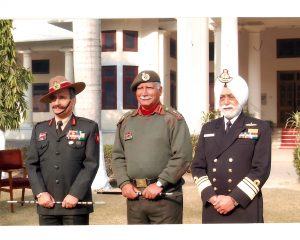 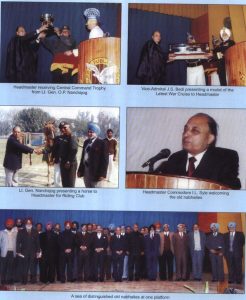 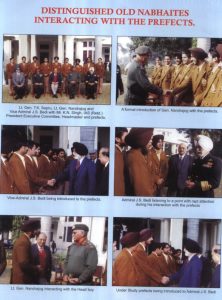 On the left is trio of Lt Gen TK Sapru (S-42,1964) Army Commander West;Lt Gen OP Nandrajog (B-1,1963) Army Commander Central and Admiral JS Bedi, Flag Officer ,Western Fleet: The picture in the center is from School chronicle page of the gathering and on the right showing interaction with students. Nandrajog presented school with a horse and Bedi presented the model of a ship to the School

In February 2008, Inderpreet Kaur, a student of Class XII visited Japan under an exchange programme sponsored by Youth for Understanding India. She was one of ten students selected from elite public schools after a rigorous written exam and personal interview. She spent almost one month with her host, Mrs. Hiroko Fujiwara, a retired school principal, and attended classes at Matsuyama Higashi High School at Matsuyama. 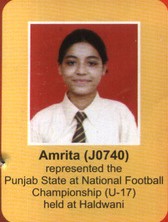 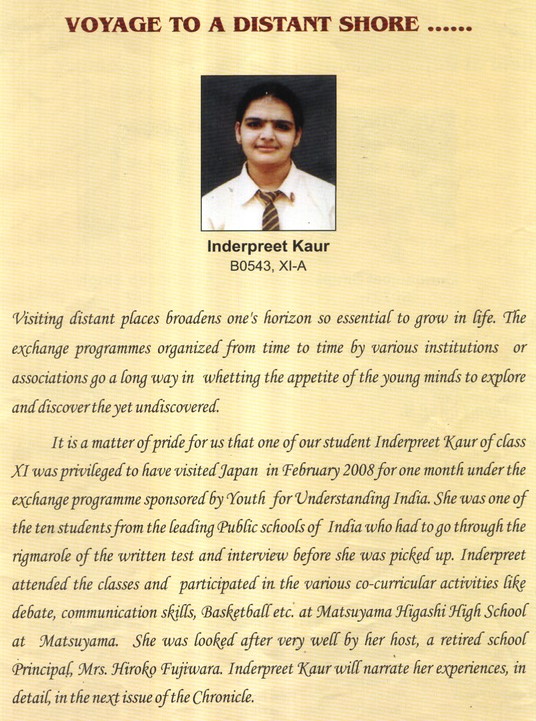 In October 2008, continuing their winning spree, the school Riding Team won the Northern India Inter Public Schools Equestrian Meet and bagged 86 medals out of a total of 120.

The school hosted the 45th IPSC Athletic Meet for Boys and Girls from October 31st to November 2nd 2008.The school athletic team (boys) under the expert guidance of Mr. Jaipal Singh came out with all guns blazing and gave MNSS Rai, their closest sporting rival in modern times, a run for their money. Records tumbled one after the other as the school athletes stamped their authority and class. 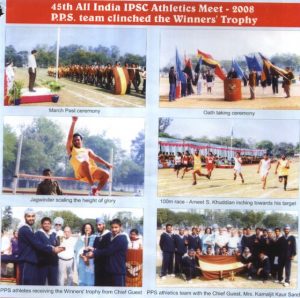 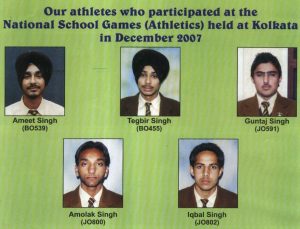 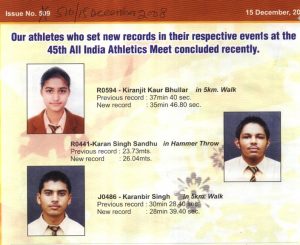 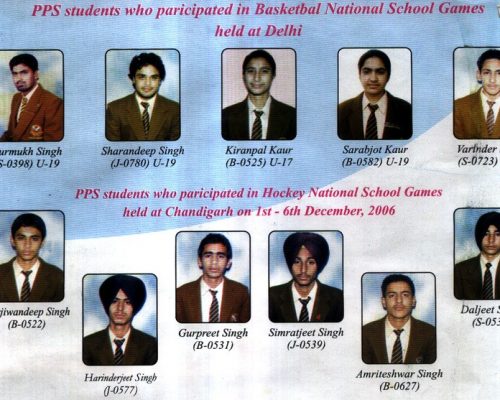 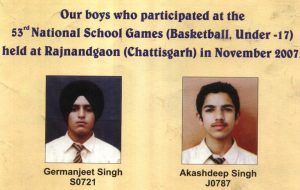 Picture on right shows group photo of teams before a Past(ONA) Vs Present basketball match in 2007 with Headmaster IL Syal and Harpartap (B-45,1967) President of ONA.

The students of class VII and VIII participated on the theme of “warmth” under the UKIERI Project (United Kingdom India Educational Research Initiative) in Jan 2009. Children expressed the theme Warmth through different creative forms. They recited poems, wrote essays, made charts and power Point presentations displaying and expressing the theme of warmth.

In June 2009, five boys of the school again successfully climbed Deo Tibba peak (6001M) as part of the IPSC team.

The school became ‘Global Member’ of the Round Square fraternity in October 2009 at Mayo College Ajmer Conference. The School also hosted the Senior Round Square Conference in September 2009.

The UKIERI delegation from UK visited the school in October 2009, before leaving for Amritsar next day.

Commodore Syal had more than 37 years’ experience in the field of education and administration. He was conferred with the ‘The Jewel of India’ award by International Institution of Education, an organization based in New Delhi.

Commodore Syal’s term as Headmaster came to an end in December 2010 after he had very successfully conducted the Golden Jubilee Celebrations in April of the same year. President of India, Mrs. Pratibha Patil had graced the occasion as the Chief Guest.