(The force behind ONA)

Mr. JK Kate realised early, the importance of an Old Boys Association of  The Punjab Public School, Nabha. To give a practical shape to this idea, a meeting was held on 14th March 1965, where the ONA was launched.  Mr OP Bhatnagar (Hindi) was unanimously elected General Secretary (staff). According to Anil Luthra (S-37, 1964) who attended it, “All I remember is we were five or six of us sitting around a table. I just asked one question as how will it fund itself when it grows big?”

With this meeting the ONA run by the School but not Old Nabhaites got off to a humble start.  Some activities managed by School with school funds took place as long as Mr JK Kate (1972) and Mr Bhatnagar (till 1970) were there, after which this informal ONA fizzled out. But it was the starting point.

In 1981, Dr. Jashanjot Singh Bhangu (S-52,1967) was posted as Radiologist at the Civil Hospital, Nabha. Feeling the need to reconnect with his classmates from school he mooted the idea of launching the ONA formally. He felt Old Boys Association being an essential legacy and tradition of public schools, it was the duty of Senior Old Nabhaites of 1960s to get it rolling. Gp Capt AJS Grewal, the Headmaster, responded enthusiastically and offered help to Old Nabhaites.

Taking initiative Dr Jashanjot working as Organising Secretary and involving Old Nabhaites like Zora Singh Bhullar (J-16) the first Vice President, Kedarnath (J-4) the Treasurer, Pradeep Batta (J-22) the first Secretary , Pradeep Gupta(B-315) as Joint Secretary,  an old school girl Dr. Gurpreet Grewal (nee Kalyan) (first lady executive member),  was responsible for giving birth to ONA run by old Nabhaites themselves . In other words it was an ONA for, by and of Old Nabhaites and not run by The School. Late Satwant Puri (S-286) of Patiala a lawyer, wrote the first Constitution.  The connection with School was maintained through Gp. Capt AJS Grewal (Headmaster) as the ex-officio Chairman/President.

A database of Old Nabhaites was built up manually using Bill registers provided by the Bursar late Mr GS Punia. These registers had the home addresses of students where term bills of each student were sent. Reply paid post cards were sent out to addresses selected from these registers. Those with positive response were recorded in a database built up on library cards provided by Librarian, Mr Singh. Two cards were prepared for each Old Nabhaite according to House number as well as in alphabetical order. These cards were maintained in Bata shoe boxes just as in Library catalogue. An address could be located within a minute using house number or name of Old Nabhaite. (All this manual work and running around was done by Dr Jashanjot Singh himself) This was the humble beginning of ONA as there were no computers, mobiles or internet and even funds. A clerk was provided by the school to handle mails or letters.

In order to keep old Nabhaites informed about each other as well as about the activities in the school, a medium for flow of information was felt essential. Thus was born  ‘The Eagle’, Dr Jashanjot Singh was the Founder Editor. It was initially called the “ONA News Bulletin” and its printing and postage costs were met by advertisements from Old Nabhaites on its last page. Later, in one of the meetings the name ‘The Eagle‘ was adopted because of its presence on the school logo and its sheer symbolism. With its advent the dormant feelings for the PPS in Old Nabhaites were aroused and the response was enthusiastic. ‘The Eagle’ contributed greatly to bonding within the ONA. The database of the Old Nabhaites gradually started growing. Thus the Old Nabhaites Association was firmly established.

When Mr Kate suffered from heart disease and was advised surgery in USA, the great honest headmaster found it difficult to meet the expenses from his savings of a long career. Jashanjot along with Headmaster AJS Grewal and staff of  The PPS spearheaded a drive to help the Kate family raise funds from School, staff and old Nabhaites and parents (as many were not earning at that stage). Many abroad were requested to provide local help there.

In 1985, Jashanjot managed to gather a large number of Old Nabhates for celebrating Silver Jubilee of the School with help of his team mentioned above. Arrangements were made within school for all old Nabhaites to stay (almost 200). The funds for the event apart from small registration fee came from sponsorship by Gursharan Singh (B-112,1969). This phase was a turning point for ONA as school no longer funded the ONA Day celebrations but old Nabhaites themselves did so. He made sure that prominent news paper of the region “The Tribune” carried an article at this occasion on school for which he coaxed his father-in-law, an eminent writer S Kulwant Singh Virk to pen the Article “A school with a difference”.

After this Jashanjot moved to Jalandhar the management of ONA was passed on to DONA (Delhi Chapter) with Vinod Kashyap  (J-65,1967) as President for running it. DONA at that stage were the only one who volunteered to carry on the work. They did an excellent job for many years and held many high profile functions. Then Punjab got embroiled in extremism movement. With little activity taking place during this period it led to low phase of the School and ONA.

In late 1990s when ONA was going through a prolonged lean period, Dr Jashanjot again got involved in ONA as Secretary while practicing at Jalandhar. He then led rejuvenation of the ONA along with President Navin Talwar(S-71,1969), Kedarnath Bansal (1964, Jumna) and Col BS Grewal (S-50,1967). A formal Constitution was adopted and the body formally registered in Jalandhar under Societies Act 1860.

This was followed by holding of a grand function at the millennium “Rendezvous 2000” organised by Jalandhar Chapter in school.  This was one of the biggest functions held by ONA till then. This was a stage when mobiles, computers and internet were gradually becoming useful tools which were fully exploited by Dr Jashanjot.

He restarted “The Eagle”with support of Ashwani Aggarwal (J-144) to increase flow of information among Old Nabhaites. He also started Facebook  “OnaPps” page  and website (www.ppsona.org) sponsored by Sarvinder Saini (Jimmy J-452) to reinforce information exchange among Old Nabhaites. He has never been President or Treasurer of the ONA, but he was made secretary for a two year term, from which he resigned as soon as his term was over. He feels one can contribute to growth of ONA without being office bearer. He was able to accomplish whatever he could with appreciation, love and affection and support of Old Nabhaites during this journey. When he resigned as Secretary on completion of his two year term, the house at the AGM elected him as Executive member of ONA for life and in charge of “The eagle”.

He worked for the success of Golden Jubilee Celebrations of The Punjab Public school (2010) doing a  lot of work to dig out history of school and motivating a large number of old Nabhaites and Ex-Teachers to attend ,including old VSO teachers from UK who had served  the PPS. Again at this occasion he made sure The Tribune came out with an article on School “A Class apart” written by his friend and actually Headmaster of rival school (YPS) Dr Harish Dhillon.

After this period he has gradually withdrawn from active participation in ONA and has refused to become active again feeling that ONA must now evolve onits own and new teams should be replacing old ones with gradual changes of guard. He has however offered help to whoever is at the helm of ONA affairs. Dr Jashanjot has been the leading force behind establishment of ONA as a body ,his work for it , spanning over thirty five years. 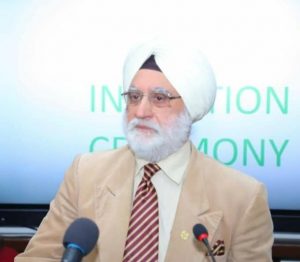