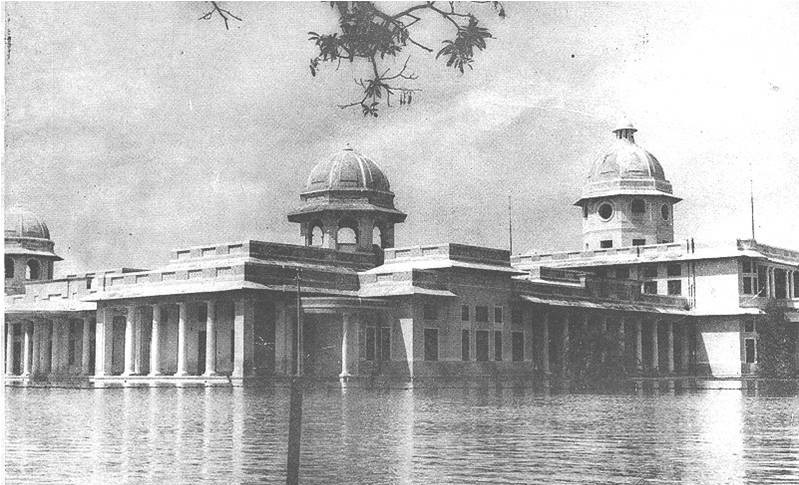 The students were expected to report back to school on August 21, 1960, after the summer vacation, but the persistent rain throughout the night of August 20 and the following day resulted in a disastrous waterlog. The water level gradually rose precariously and reached the plinth of the New Secretariat (Kairon Block).

After a few days wait for the water level to subside, Mr. Kate decided to evacuate the building and shift base to the Guest House. Tongas, bullock carts and rickshaws were hired and laden with crockery, bedding, clothes, furniture, ration, utensils etc. to be taken to the Guest House. Meanwhile breaches in roads and railway tracks compounded the problems for parents who were coming to drop their children from far off places. The crammed Guest House looked more like a refugee camp than a School building and the evening roll call showed only sixty students present.

Intermittent rain on the 22nd served to aggravate the position slightly. Boys continued to come in dribs and drabs, and by that night we had almost reached our century. When the water level showed no signs of dropping for the next five days, Mr. Kate decided to start classes in the Guest House itself. “Operation Reshuffle’ was put into action. After bringing in the necessary equipment from the New Secretariat, classes begun, and this routine continued for nearly a month.

A review of the situation on the Tuesday suggested waterlogging to last at least a week, so that day, books, desks, chairs, blackboards, and all other paraphernalia of teaching were moved across and regular, though depleted classes began on the 23rd.

At one time or other, all of us had heard telltales of Nabha’s notorious waterlogging and we were now to discover to our cost that even the most seemingly far-fetched of these stories were not exaggerated. The decline of water level at the Secretariat was so slight as to be almost imperceptible and it was only a question of days before the miniature lake become stagnant and fetid.

A week after term began, on Sunday the 21st, it was decided to organize life and work at the Guest House on a quasi-permanent basis, on the assumption that the secretariat would be out of commission for at least another fortnight, all that day was given to ‘Operation Reshuffle’. The four houses, less VA and VB, moved upstairs: Beas into the Guest Suite with Ravi in the corresponding set of rooms at the back, while Sutlej occupied Headmaster’s suite with Jumna behind them. In so far as this was possible, House masters were allotted quarters adjoining the respective Houses. On the ground floor, the Assembly and Dining Halls were converted into dormitories for the boys of VA and VB, and the large semi-closed verandahs adjacent to these were transformed into dining rooms. The rooms in the rear wings, plus the Billiard Room and Card Room, comprised the Academic Block, while Hobbies, Art, Carpentry and Music found their temporary abode in the suites on either side of the foyer.

“Well!”, said everyone, “and the water will subside”. Ten agonizing days we waited, but with little result.

Finally, Mr. Kate’s patience ran out and he decided to mobilize the boys for operation clean up. Then, the Headmaster went into action. Pumps were requisitioned, these were installed and alternate canals or new channels were dug.  And existing channels cleared. Sludge was scooped out and bailed out bucketsful of water. Soon it became possible to reach the Secretariat dry shoed. Portions of the grounds are still damp, but noxious vapours which rendered the atmosphere decidedly unwholesome have disappeared.

By September 27th, the underground drainage was once again functional, and things were back to square one, the move back to the Secretariat was smoothly and expeditiously carried out.

The predicament, for predicament it certainly was, called for zest, energy, and drive. We were fortunate in having all this in abundant measure. This Interlude, unpleasant and frustrating as it has undoubtedly been, has not been without its advantage too. Living in such close proximity, and virtually confined to the purlieus of the Guest House. Staff and boys have come to know each other intimately, and a healthy esprit de corps is well on the way to being established.

Nevertheless, it is the fervent wish of every one of us that all possible steps will be taken to prevent a recurrence of such a disruption. The likelihood of it becoming an annual feature of the life of the School does not bear thinking so.

Below is the actual coverage of the great flood in the birth year of the School, as written in the Chronicle of October, 1960: 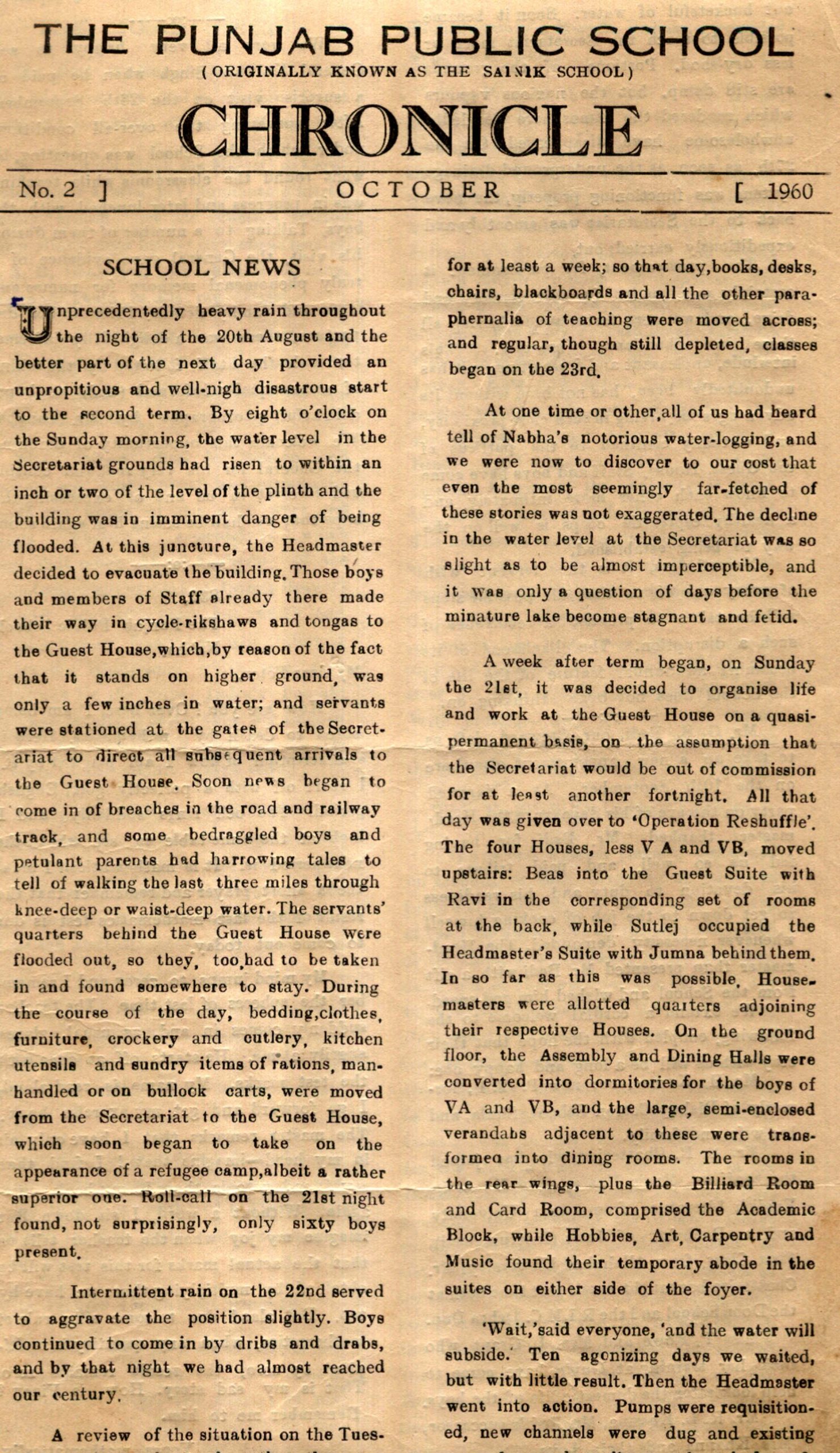 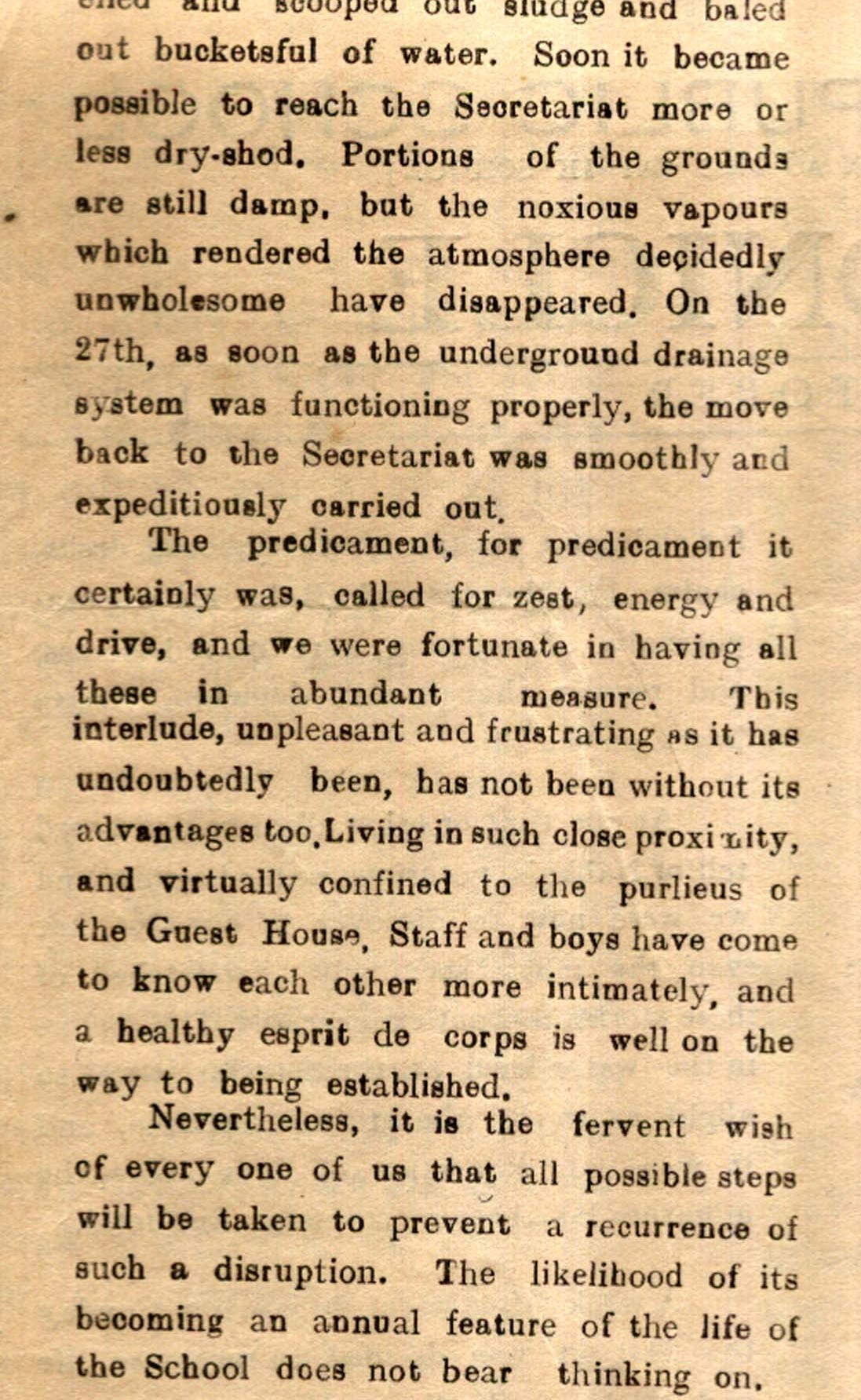