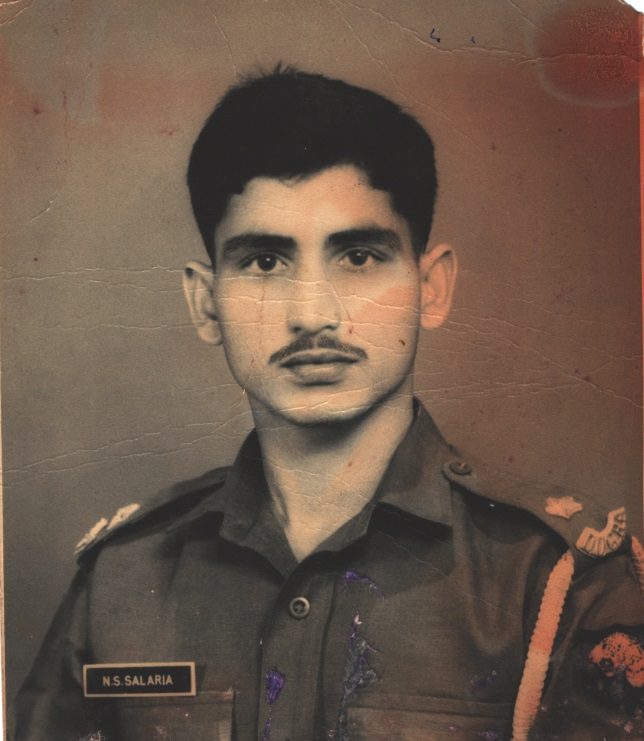 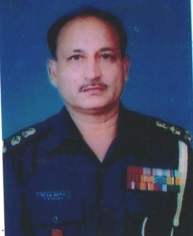 Niranjan “Chutt”(J-13,1965) as a young Lieutenant and as Lieutenant Colonel.

Niranjan Singh Salaria belonging to district Pathankot, joined the Punjab Public school, Nabha in 1960, the inaugural year of the school. Being one of the earliest students of school, he was witness to the first official or working Day of the school. He was allotted Jumna house with unlucky for some, number  13. But his achievements made J-13 lucky for him, as things turned out during the latter years.

Because of his sharp talents in sports, he was nicknamed “Chutt”,( in hindi meaning short and sharp like the nickname itself) by the popular sportsman house master of Jumna, Mr YP Bharadwaj, the history teacher, who later headed Motilal Nehru Sports school at Rai, Haryana.

At School he excelled in sports, especially boxing and was declared the best boxer. He was the first student from school to win a Gold Medal in Northern India Boxing and Punjab Boxing championships. In the school boxing team he was in company of Gen. OP Nandrajog (B-1,1963), another great boxer of school and NDA.

“Chutt”, was also extremely good at gymnastics and was leading member of the gymnastics team. He received many awards for his performance in sports. In fact, he was chosen to receive the best Sports House trophy for Jumna at the 1966,  Founders ‘Day. 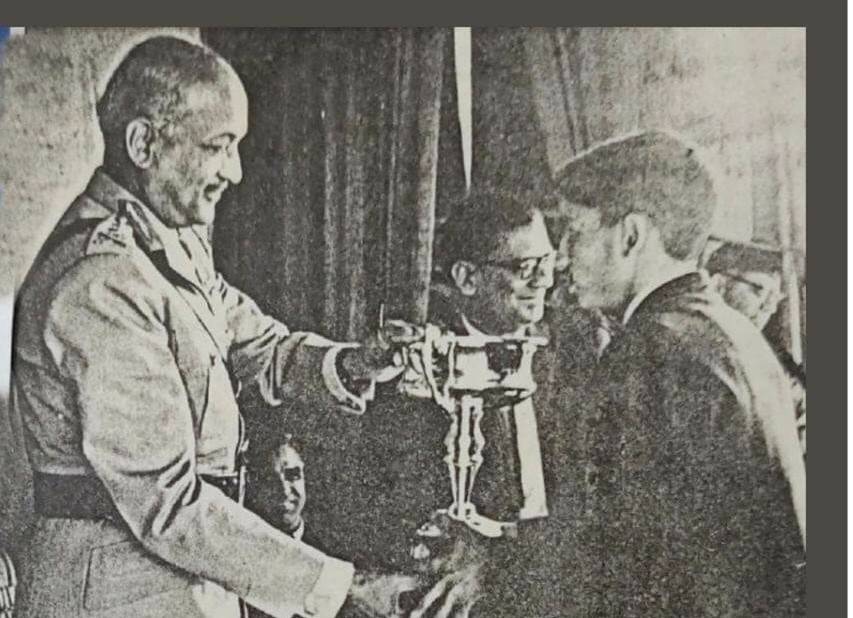 Receiving the Sports Trophy on behalf of Jumna House from Gen JN Chowdhary COAS, India in 1966 on Founders’ Day. 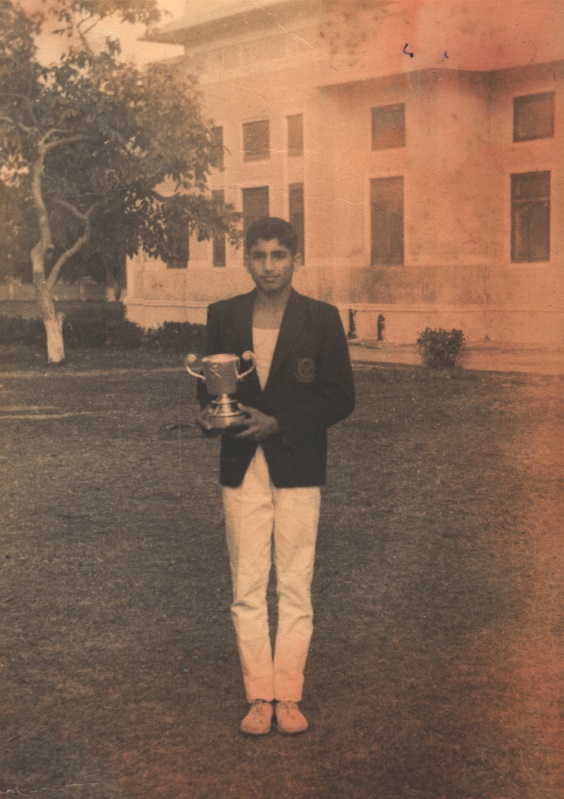 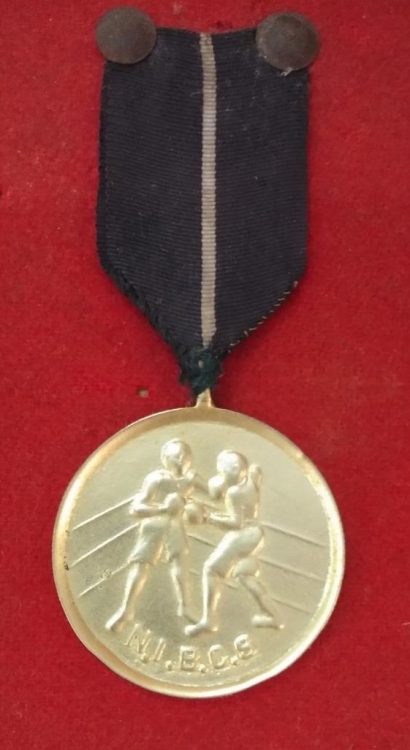 “Unsung Hero of PPS, Nabha and The Dogra Regt. Lt Col Niranjan Singh Salaria (Retd), Ex 6/12 Dogra studied in PPS, Nabha, (J-13 ,1960- 1966 Higher Secondary).  An outstanding sportsman soldier, he led the first ever strategic foot column to the Siachen Glacier, in Apr 1984, going down in military history of the region”. 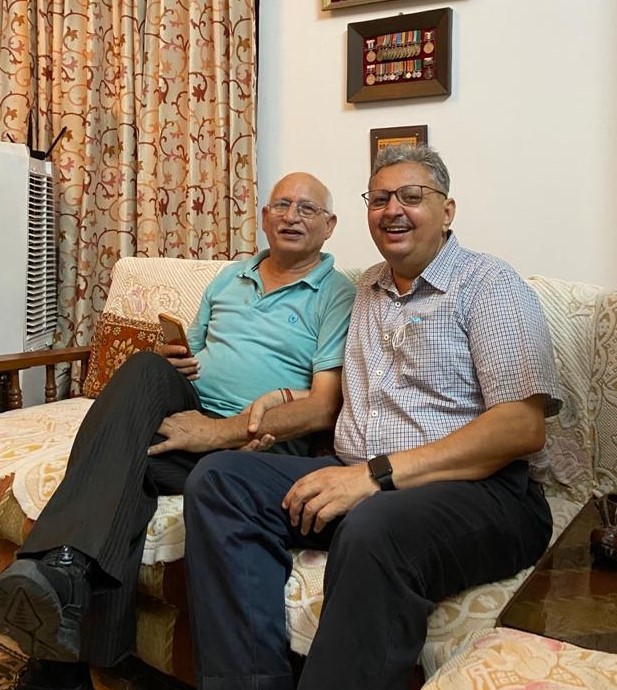 A write up on Lt. Col NS Salaria and his extra-ordinary achievement of grit and physical endurance: 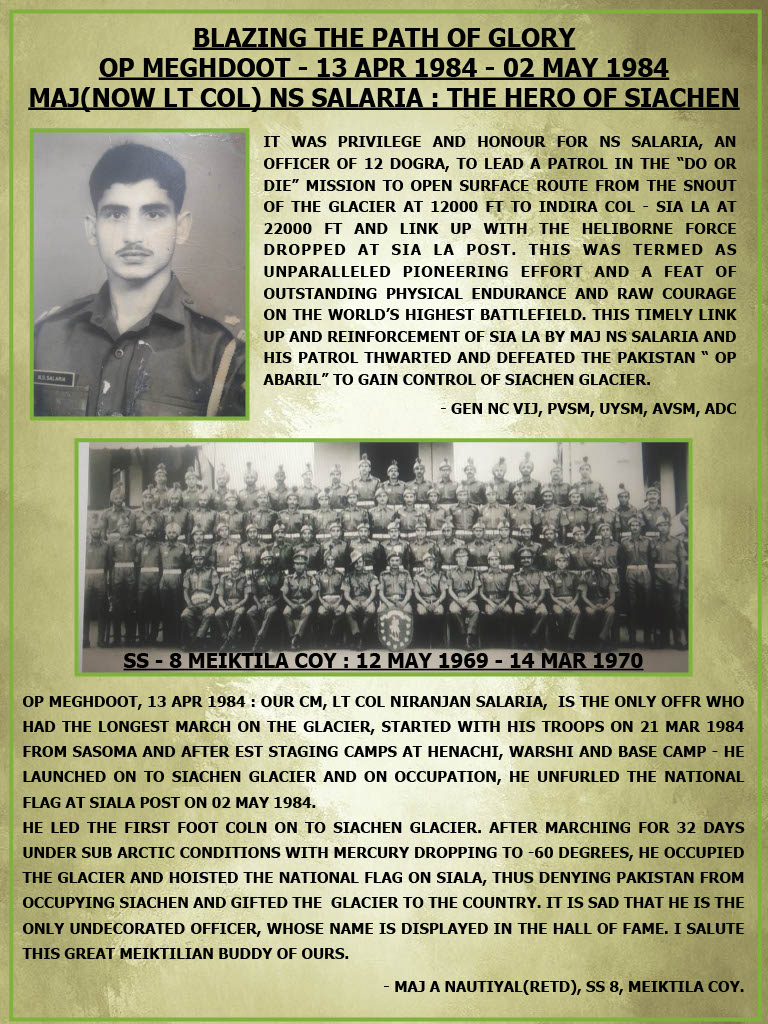 It must be mentioned here that the first para has been written by the then COAS (Chief Of Army Staff ) of India, Gen. NC Vij, himself.

On Oct 6, 2021 he was honoured with display of a Board in the OTA (Officer Training Academy) for motivation of young gentlemen cadets undergoing training at the Academy. 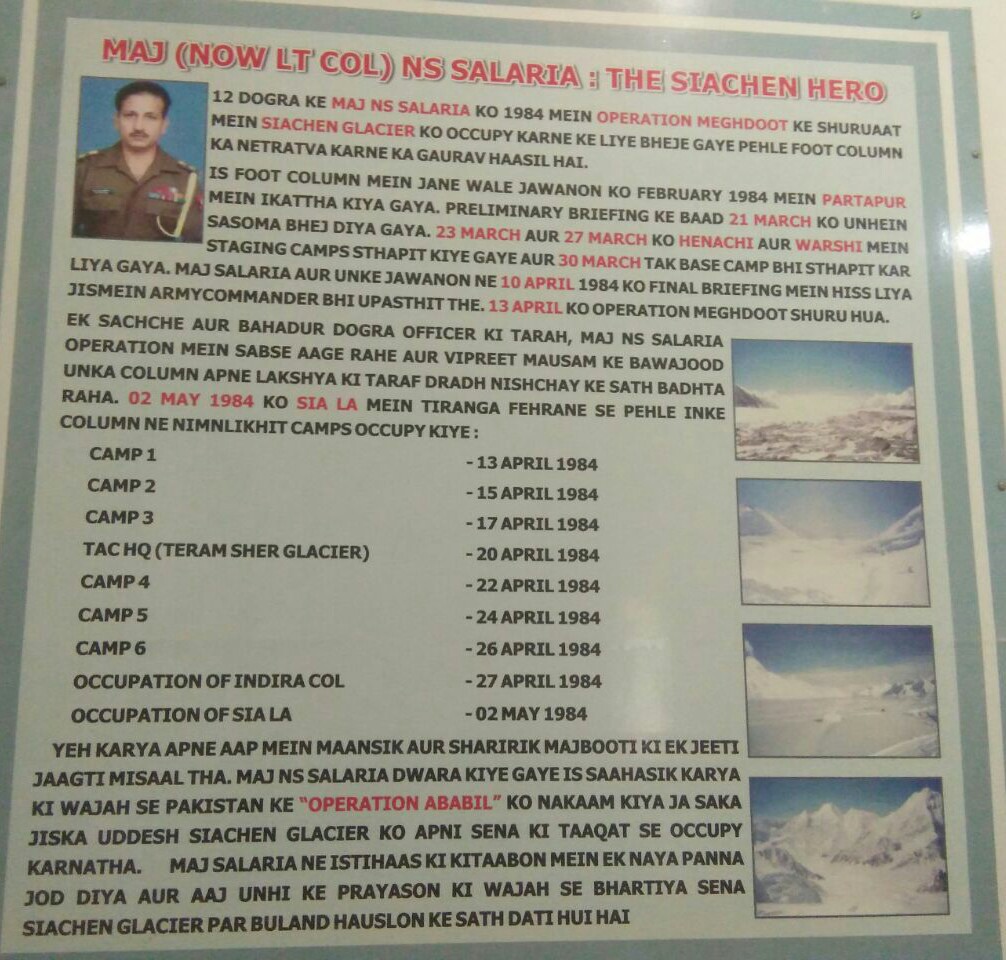 The board displayed at the OTA 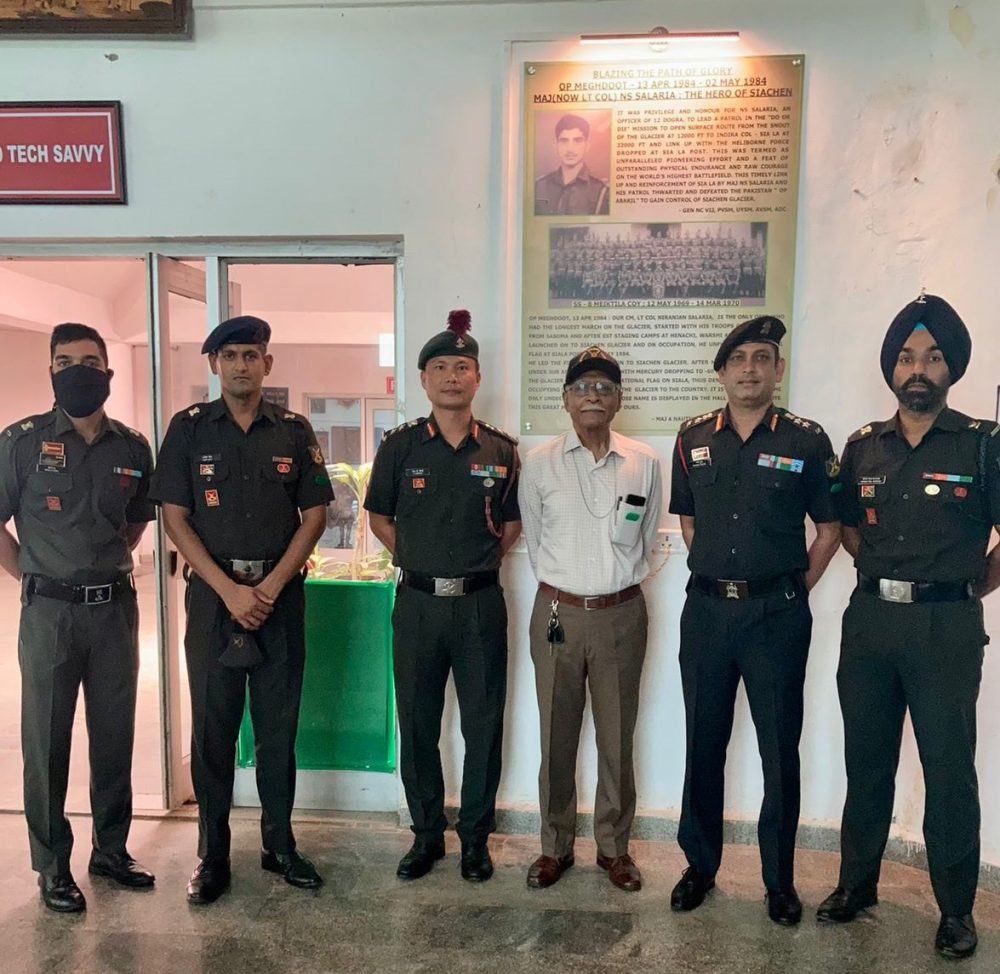 Officers who graced the occasion. 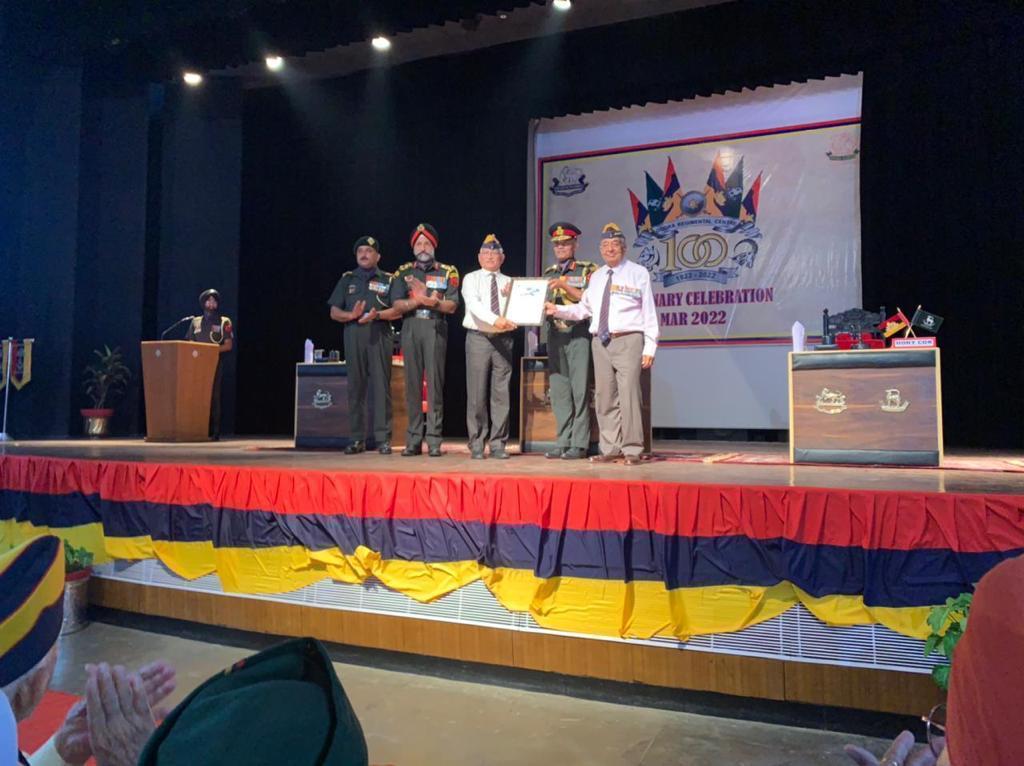 Hero of Siachen- the first officer from Kathlaur colony Pathankot from the Dogra Regiment who led the first foot column to occupy Siachen Glacier being felicitated by General NC Vij ex COAS and GOC in C southern comd. Lt col N S Salaria (Retd) ex PPS J-13 being felicitated by General N C Vij , ex COAS and Hony Col of the Dogra Regt & Dogra Scouts and Lt General JS Nain , GOC in C Southern Comd & Colonel of the Dogra Regt and Dogra Scouts during the Centenary celebrations for his outstanding achievements in Siachen Glacier where he was instrumental in leading the first foot column to physically occupy the Siachen Glacier. The unsung hero was humbled by the recognition given to him during the special Sainik sammelan held at Faizabad.

His friend Arvind Nautiyal, has this to say in a letter to his colleagues:

Finally, deserving honour,  has been given in OTA by installation of a board with photograph of our dear buddy Lt Col Niranjan Singh Salaria and giving details of his remarkable achievement for our nation, in the Anteroom of Meiktilia Company of OTA which will act as an inspiration to future generation of Gentlemen Cadets.

Niranjan Salaria has made all of us proud. Message from Maj Angad of OTA in this regard along with related photographs are given below for your information. Always on your service.

The Message from Major Angad: 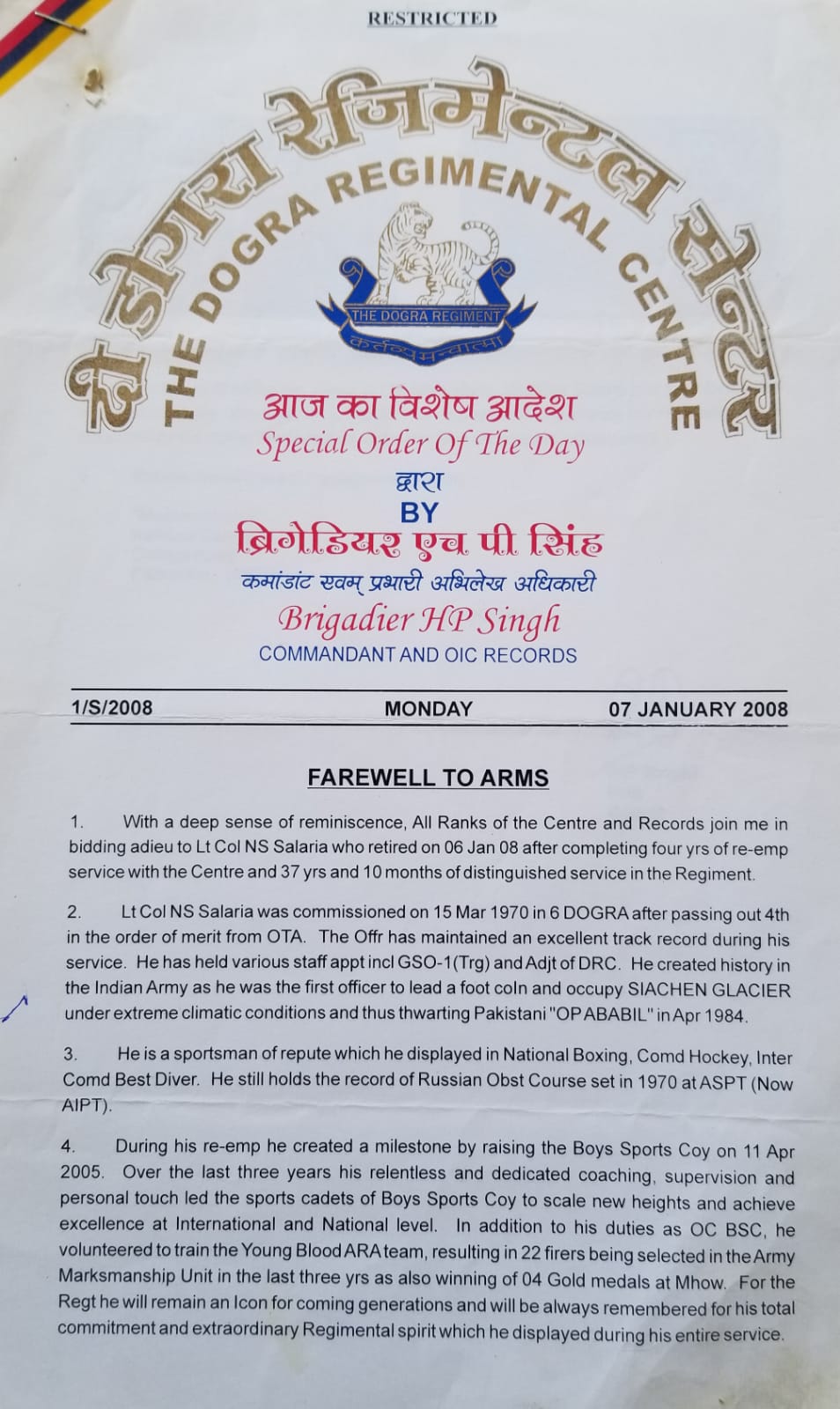 Above is a page from the Special order of the Day issued by Brig HP Singh of The Dogra Regimental Centre dated 7January, 2008 after retirement of Lt.Col. N S Salaria.

While in service he excelled in Boxing, Hockey and was declared Inter Command ‘Best diver’. His record of Russian Obstacle Course at the Army School of Physical Training set in 1970 , still stands as per information available as of 2008. 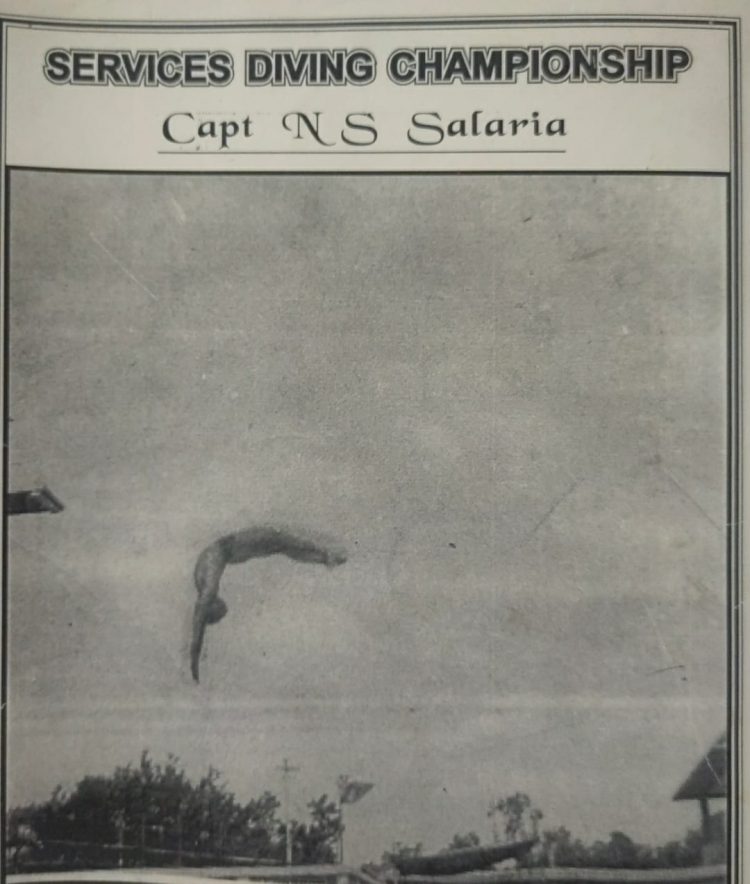 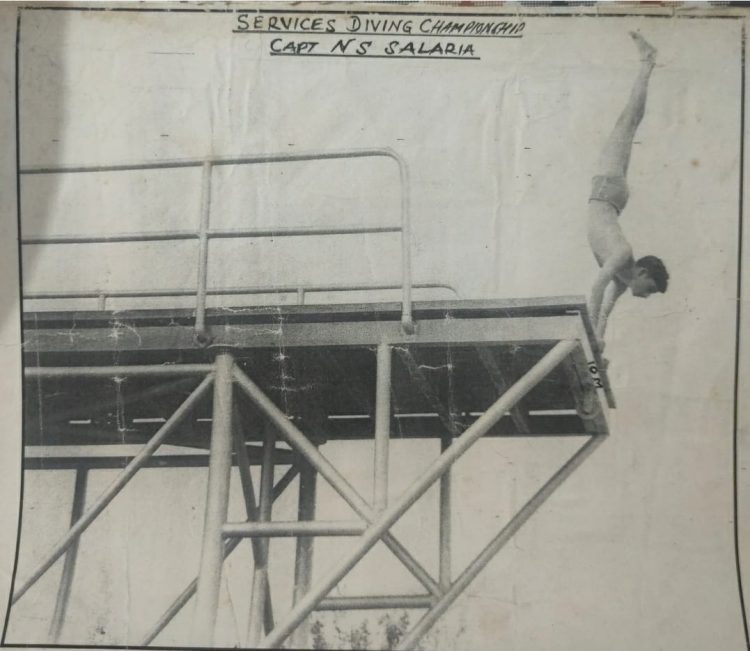 The Punjab Public school, Nabha Family and The Old Nabhaites Association is proud of the accomplishments of Braveheart Niranjan Salaria (J-13, 1966- H.Sc.). 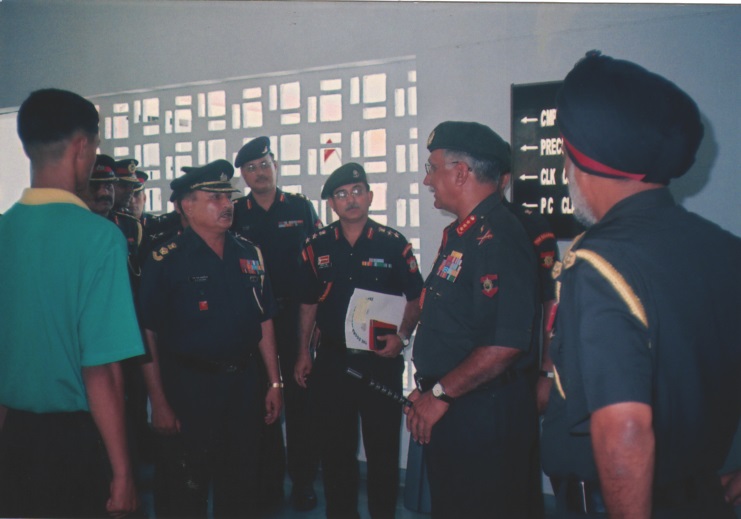 Photo with Lt Gen OP Nandrajog of 2006. Seen is J-13 left, talking to B-1 on right, both were part of school Boxing and Gymnastic team. Niraranjan ‘Chutt’ was the first student of school to win gold medal in d Northern India Boxing Championship.

He is still fondly remembered by the former students of the school with respect and affection.

Amarjit Shaheed, (B-102, ‘64-70) was a good sportsman himself but was enamored by the talent of Niranjan as young boy in Junior School. He says, “I was much junior, but still remember you as one of the best gymnasts of our time. I was a big fan of you as a Gymnast. Watching you inspired me to join gymnastics under Mr. Kumar, but gave up after disappointing results. The bar set by you was just too high for guys like me.”

“I am imagining you in white trousers, a white vest, newly polished white PT canvas shoes, running up to the horse and jumping through the ring of fire gallantly! And I hear the clapping n hurrays!!”

Maj Gen Sandeep Sharma (S-328,1976) who joined much after Niranjan had passed out from school and is almost 11 years junior to Niranjan Chut in PPS: “Great meeting you sir, you are a sincere motivated soldier, still fit as a fiddle and I get rejuvenated from your presence, Cheers!”

Col Harjit Chahal (J-49,1967) housemate and one year junior remembers him as a short but excellent gymnast because of which he was in fore front of all trick gymnastics. He would be the first one to sail through the burning ring of fire over the vaulting horse. He also excelled in Hockey and other sports. In the house he stood out as a pleasant personality.

Lt Gen Vinay Sharma (S-129,1967) from the Dogra regiment himself: Niranjan was a tough, through and through soldier, perfect fighter. His feat in Siachen has no parallel. Very good at sports, he stood out at the highest level of sports in Army.

“I have known Salaria from school days and would admire the young , short, athlete perform exceedingly well in PT, Gymnastics and on the Sports field. Later he got commissioned in the Dogra regiment. We were all aware of his trail blazing foot recce on the treacherous heights of Siachen Glacier in 1984 sans the equipment of today. Unfortunately, his historic trek remains unrewarded probably due to the sensitive nature of this tough task in the remote forbidden terrain. Niranjan is a simple, capable, plain speaking, fit tough and dedicated Dogra Officer who has contributed his might to the DOGRA Regiment and the INDIAN ARMY”. 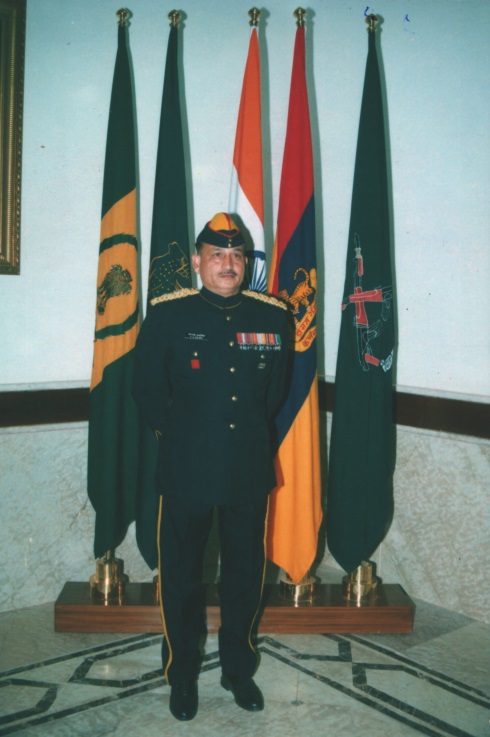 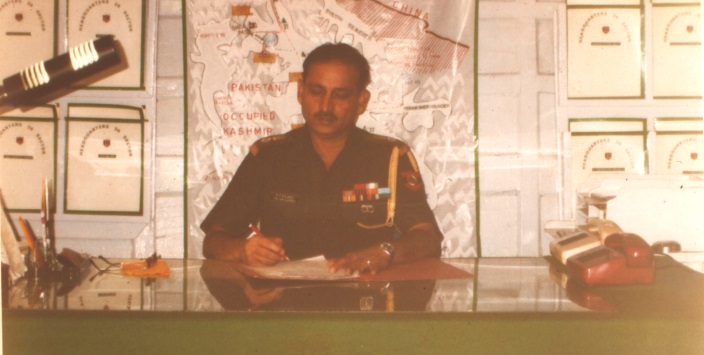 The perfect fauji!  above

And the Perfect Family man! below 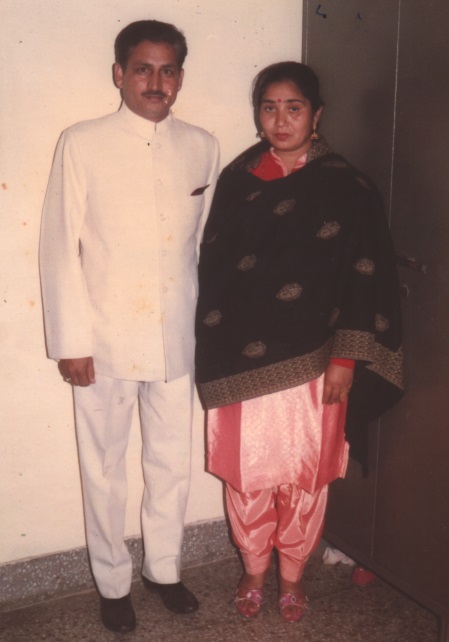 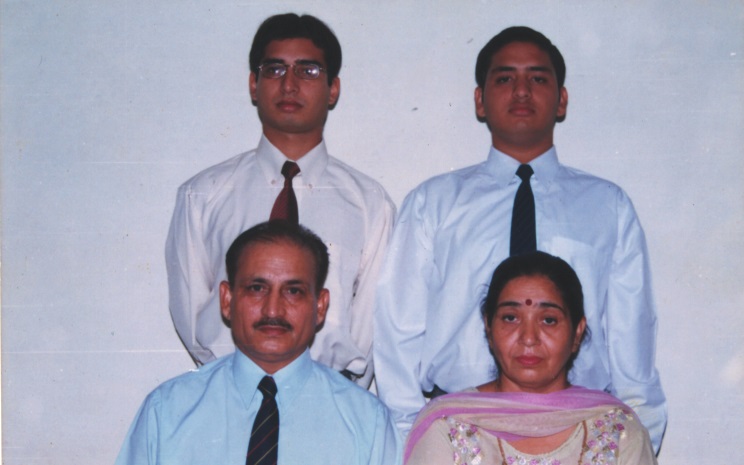 The Duke of Wellington is supposed to have said, “The battle of Waterloo was won on the playgrounds of Eton”.

It can be said, “Pakistan’s “Operation Ababil” and the battle of Saichen was won by India on playgrounds of The Punjab Public School, Nabha”.

« Previous article
"When Kairon Block Became Lake Palace, The 'Great Flood'!" Next article »
"The 101st issue of the Chronicle"