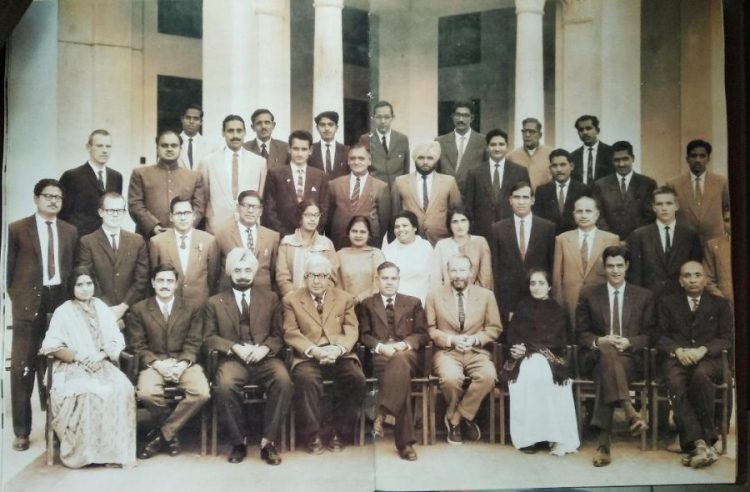 (Brief life sketch of the Great Founder Headmaster of The Punjab Public School, Nabha who within few years made it one of the best Public Schools in India. The picture shows Mr JK Kate the architect of The PPS who made the school into a very strong monument with his team of Staff members of 1960s who were the Pillars that strengthened it.)

Mr Kate was born in a small town in the Ahmednagar district of Maharashtra on12th August 1914. He moved to Pune at an early age and then moved to Baroda where he passed his matriculation. He studied in the well known Baroda High School and started his teaching career in the same school.

He did his masters in Pali and as his first love was teaching he completed his teachers training as well. Right from an early age he was interested in literature and poetry and wrote many poems ,which were published and started ‘Sharadutsav’ a poetry meet for poets. He wrote a poem detailing the history of the Gaikwads on the birth of Sangram Singh Gaikwad the son of Pratap Singh Gaikwad H.H of Baroda State and thus came in close contact with the royal family of Baroda.

He would take tuitions even when he was studying. The Patwa coaching classes where he taught were a cause of jealousy among the other teachers as his class was always full! After completing his masters in Pali and his B.T. he started his teaching career at Baroda High School. He was full of energy and enthusiasm and soon established a reputation of being an excellent teacher.

There too he started many new schemes including a House System for day scholars, which was much appreciated by the parents. He started a tuck shop for the school; this was also highly praised as everyone lived on campus, and would have to go a good five kilometers to get even a packet of biscuits! Thus his administrative skills got a fillip. By the time he left Daly College for Sanawar he was a House Master.

In 1953 Mr. Kate joined The Lawerence School, Sanawar, as a bursar. Apart from teaching he took over the administrative reins of the school. He introduced new ideas and brought about many changes in the school, whether it was replacing the western diet for an Indian one or hiring tailors to stitch uniforms or going to Bhakra Nangal to ensure the school got electricity (it got electricity for a few hours each day).In a short span of time he earned the respect of the teaching fraternity not only in Sanawar but in other public schools as well. In1958 he was selected by The British Council to study the public Schools in England

In 1959 he was selected as Headmaster, to start the first ‘Sainik School’ in India in Nabha, as was envisaged by Sardar Pratap Singh Kairon, the then chief minister of Punjab. Moreover, with Mr John Martyn (Doon) and Mr JTM Gibson at Mayo, English headmasters were the norm in those days. Mr Kate’s name was initially recommended by Dr Dipak Bhatia, a renowned surgeon and the doctor to the governor of Punjab. Mr Martyn and Mr Gibson also recommended Mr Kate.He was also the first choice of the Sub Committee for Sainik School at Nabha.

In 1961 it became known as The Punjab Public School. With his vision and dogged determination he brought the school in a short time on par with other well established public schools in India. Starting from scratch in 1960 from the ruins of princely buildings of Nabha , facing a flood in the very first year he built a school which was delivering one of the best Senior Cambridge (the preferd exam taken by Public Schools in which there was a  feeling of pride and distinctivness )  results by mid sxites. This was remarkable as intake was not elitist but mostly children with little knowledge of English. It made other established Public schools sit up and take notice. Soon it was included in the best seven Public Schools list of India. In1972 he was conferred the Padmashri for his contribution to education. When I asked how he felt when he met the President he replied, that what gave him greater happiness was to see that the three aides (defence officers) who escorted him to the President  were his ex students!

Mr. Alfred D’Souza who conducted an exhaustive study in his book “The Indian Public Schools” writes as follows: “Among British Public Schools, the most famous are known as the “Seven”.  These are Charter House, Eton, Harrow, Rugby, Shrewsbury, West Minster and Winchester.  The masters of the schools in the sample were asked to rank the seven leading Indian Public Schools.  According to 84 per cent of the masters (excluding Military schools) the following are the Indian equivalent of the British, Seven” Doon School, Mayo College, Modern School, Scindia, Lovedale, Sanawar and Punjab Public School.  It should be noted that these schools are not listed here in an evaluative rank order.”

The boys of Punjab Public School, Nabha were close to his heart, his face would light up if they called or came to visit and in the end it was they who took care of his heart (when he fell sick) with their care, magnanimity and love for him, for his boys and his teachers life had come full circle.

In the same year (1972) his old school, Daly College called him to take over as Headmaster and to reestablish its former glory. For Mr. Kate it was like going back to his roots and he brought about sweeping changes which helped the school establish some of its credentials.

In 1978, the government of Haryana beckoned him to head their prestigious Sports Institute at Rai. He always loved the North and decided to join. Soon he joined the Motilal Nehru School of Sports Rai, as Director. Not one to take things easy he worked as hard as ever, in spite of his ill health. In 1981 he retired and set up residence in Pune with his family.

The end came on 5th August 1990. I’m sure if he could live his life again he would still love to go back to Nabha and serve the boys he loved and cared for so much.

If one were to write down all the anecdotes recited by his students and teachers associated with his brilliance as a thinker,leader, educationist,economist,administrator,planner, considerate, visionary, humane  and all positive features one can think of, it could fill not a book but an encyclopaedia.

This life sketch would be incomplete if without mention of Mrs. Nirmala Kate who stood by him through thick and thin, and by her presence helped his dreams come to reality. By her calm and helpful nature she lent grace and dignity to whichever post Mr. Kate held. And worked as hard for the benefit of the school.  Though she in between looked after Junior School it was on honorary basis and not official, as Mr JK Kate did not believe in Headmaster’s kin working in the school creating conflict of interest. 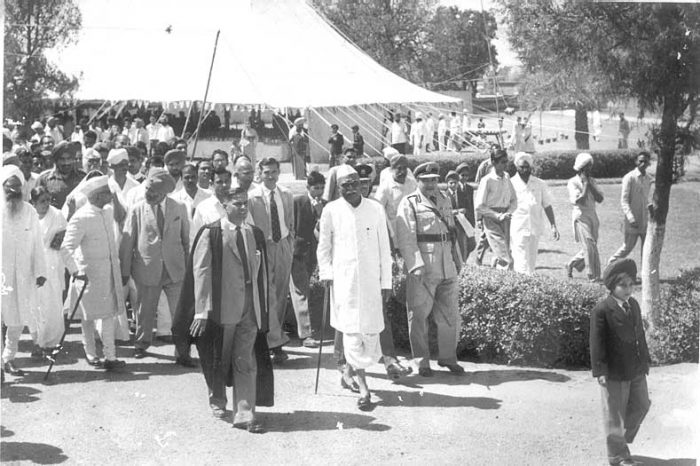 The picture shows Mr JK Kate walking with the President of India Shri Rajendra Parsad towards the porch of Kairon Block to unveil the plaque of Inauguration of “The Punjab Public School”,Nabha. The Chief Minister Sardar Partap Singh Kairon and board of governors walk behind. In front is walking young Bhupinder (B-20,1966) who later became a Urologist in USA.