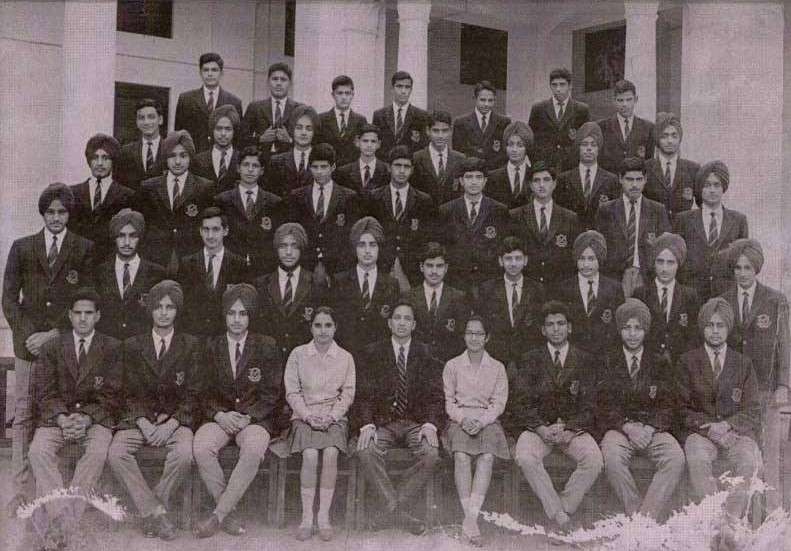 Intro by Dr Jashanjot (S-52)Below is a funny article written by Late Rajiv Joshi (J-102,1967) for an issue of “The Eagle”. The idea is to share with Old Nabhaites the punishments andattitudes of Teachers we have all felt and undergone while we were at The Punjab Public School, Nabha. The Teachers and punishments may change with times but they are all meaningful with well-intentioned Teachers.Rajiv Joshi was one of the first Maharashtrian students at PPS he was heavier than others in our class of Senior Cambridge 1967. As he was very naughty, he was always undergoing some punishment or the other. He was a very good swimmer because of the extra fat layer he possessed.In the picture he is second from left in the last row. You can see his non-conformist posture in the class group. This attitude invited the extra punishments he had to undergo.MEANINGFUL PUNISHMENT ! ! !

Who does not remember the various punishments one gets in a boarding school? It is part of the school life. Every student gets his/her share – only the frequency or intensity varies. Quite a few get much more than their share, yours truly being one of them!

During our days, EXTRA-PT was a common feature every SUNDAY morning after Breakfast. The MOD (Master on Duty) that day being responsible for meting it out. Rare was the occasion when Yours Truly JAY ONE OH TWO (J–102) was not on the Sunday Extra PT List!!! The MOD that day would invariably ask if the list was complete!!!

Then there are Punishments specific to each Master. Each had his/her own UNIQUE STYLE!

The slap of Mr. YP Johri ( MATHS ) with his elbow pulled in, and teeth clenched!

Mr. Bhave’s (Chemistry) fast hard hitting slap! The speed left one wondering where it came from.

Mr. Mitra (Maths and NCC Naval wing In Charge) clenching of the teeth and lips, (DID HE ABUSE IN CHASTE HINDI / PUNJABI!!), while throwing the duster in the direction of the irate student/students! These students would invariably be ………… hissing, booing and hooting!!!

A few punishments that Yours Truly got and remembers to date:

While walking to the games fields, (opposite the Jr. School), just before the gate, next to Mr. Kumar’s, the then PT teacher, house; do not recollect who was walking besides me; but he had his hand around my shoulder. The MOD that day was Mr. Bhatnagar (Hindi – Jumuna House master). Do not know when he biked up to us and dismounted. I felt my ear ringing as if from a close shot fired next to me! Mr. Bhatnager had slapped the chap next to me so hard! To this day I feel the tingling sensation of a TUNING FORK next to my ear when someone puts their arm around my shoulders! Mr. Bhatnagar thought that, putting one’s arm around another person’s shoulder IMPROPER BEHAVIOUR!!!

Then in my Eleventh Std. the senior most class in school, our classroom was just off the main foyer, next to the Senior Master’s Room. Mr. YP Johri (Maths), made me stand outside the classroom with my hands raised for the whole school to watch and ogle! Very, very demeaning! He probably realized it was a bit too harsh, so he made up for it by calling me over to his house for lunch the following Sunday, a long weekend. He had a small spool tape recorder/player, a novelty those days, on which he played Talat Mehmood and Manna Dey singing their very best BLUES. It was a memorable LUNCH!

And then there was Mr. Bhave slapping me for eating in class. I was eating, what is commonly known as ‘CHAKLI ‘ in MARATHI, while sitting on the last bench in class. Mr. Bhave found out, made me take them out of my coat pocket and throw them all in the dust bin!! WHAT A WASTE! After giving me the SLAP, of course! And to think ……. these were the goodies my mother had sent to me, courtesy Mr. Bhave!!!

BUT THE PUNISHMENT THAT TAKES THE CAKE: Was being pulled up by the Senior Master and my then House master (Jumuna), Mr. S.C. Cowell! It was the second term (August) and Swimming Pool Time! Do not know and cannot recollect for what specific fault – there were so, oh so many occasions that I don’t exactly remember. He called me asked me if I went to the Swimming Pool as a Lifeguard. When I answered in the affirmative, he asked me to do my duty as a lifeguard! Which meant …. not to enter the pool unless it was a LIFE AND DEATH situation!!! NO SWIMMING FOR ME!!! ALL THAT WATER EVERYWHERE and NOT A DROP TO SWIM IN!!! 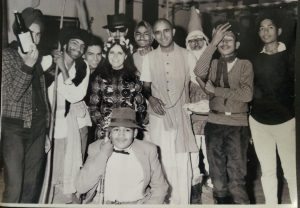