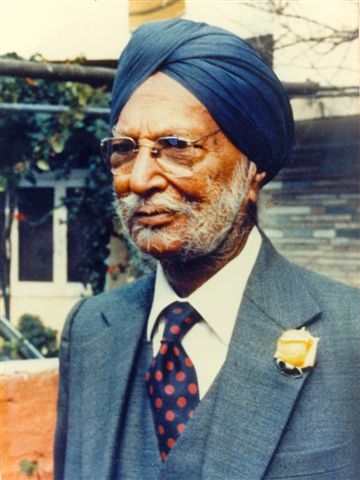 (Want to know how a car trip from Simla to Delhi got the wheels of The Punjab Public School rolling…….. Read Founder Member Col Naunihal Singh Mann’s version. It was written in 1985 for Silver Jubilee of the School. The picture shows Col Naunihal Singh Mann who was part of the Viceroy’s War Effort during WWII.)

I was travelling from Simla to Delhi in the month of August in the year 1959 when incidentally I found the late S. Pratap Singh Karion, the then Chief Minister, Punjab, was travelling in a car which went out of order. He wanted a lift for Delhi as he was coming to meet the late Pandit Jawahar Lal Nehru.

During our travel together, I casually mentioned that we have a few crores of rupees lying in the Postwar Services Reconstruction Fund (PWSRF) and we are doing a lot for the ex-servicemen and widows of those who laid their lives during World War II. I suggested that it would be a good idea to set apart a few lakhs as an endowment fund, the interest of which could be utilised for educating the children of those who fought in the World War II.

I also pointed out that in the past during the British regime, Government selected a few young boys for commission into the Indian Army from certain families. However, the stage had come when it was going to be the ‘Survival of the Fittest’. I, in the course of this informal conversation, further said that we should start an educational institution where we should prepare boys for Defence Services.

I knew the late S, Pratap Singh Kairon-had a great flair to see that the Punjab, which used to be called the ‘SWORD ARM’ of India, should always be well represented, as hitherto fore in the Defence Forces. He welcomed the idea for setting up a school for the above purpose.

Thereupon, a Sub-Committee was formed consisting of the Education Secretary to the Punjab Government, Governor’s Secretary, and the late Gen. Kalwant Singh (retired) and myself. We were asked to visit Dehra Dun to see the Defence Academy there and several other Public Schools like Doon School, which we did. We submitted a report within a month.

As soon as this was done, late S. Pratap Singh Kairon asked us to advertise for the post of a Headmaster for the school and suggested that we should go around and see the buildings which belonged once to the princely Punjab State like NABHA etc., which were suitable for setting up the school.

Accordingly, the Sub-Committee went and saw NABHA where we selected the old and new secretariat and the Guest House along with a big area of land, which we thought, would be most suitable for setting up a Public School. On going through the report, the late S. Pratap Singh at once ordered that these buildings be handed over for the purpose of the school and gave a handsome amount of rupees ten lakhs (Rs. 10,00,000/-) (It could be much more than 10crores adjusted for inflation today, in 2020) for purchasing the equipment to run the school; thus within a period of about 6-8 months from the time the idea of starting a school on these lines was mooted. Mr. J.K. Kate was appointed as Headmaster of the school, which then came into existence. It was named as ‘SAINIK SCHOOL’ and was inaugurated on 14th April 1961 by the late Dr. Rajindra Prasad, the then President of India.

No sooner the school started functioning, we approached the then Defence Minister-late Shri Krishna Menon-for providing a Doctor who should be useful for boys to look after their health and an N.C.O., to give them the preliminary military training. Unfortunately, the Defence Minister laid a condition that unless we give the school to the centre for running it, he would not agree to provide the facilities mentioned above. He also said that in case we did not agree, he would not like the school to be named ‘SAINIK SCHOOL’.

The Chief Minister, after giving considerable thought to the matter, felt that since Punjab is going to give buildings worth several lakhs of rupees and a handsome amount in cash viz. Rs. 10,00,000/- (rupees ten lakhs), we would not like the school to be transferred to the centre. Consequently, it was decided to change the name to, “THE PUNJAB PUBLIC SCHOOL”, Nabha.

To start with, arrangements were made for only 80 boys in the first year, but 130 boys had to be taken owing to overwhelming support from the public. At present, the strength is over 700 students (1985).

It may not be out of place to mention here that as the school was named as ‘THE PUNJAB PUBLIC SCHOOL’. It was opened both for the children of civilians as well for army personnel. Here it was late S. Pratap Singh, who again very thoughtfully suggested that civilians who can afford the expense should get admission but other civilians whose means were meagre, although they qualified for the entrance test may not get a chance of admission since their parents will not be able to support, the Punjab Government will give grant or scholarship to them. As such, even today the boys who have not got means to meet the high cost but are intelligent and well qualified are admitted in the school as the Punjab Government offers them a scholarship from the 6th class till the 12th class and some are being sent by the Central Government for education in the school which meets their expenses.

The school is situated amidst very healthy and congenial surroundings where we have very fine playgrounds, swimming pool, auditorium, dining hall etc., and a hospital containing 20 beds.

It is gratifying to mention here the fact that young people educated and trained at this institution have successfully found their vocation in many other fields besides the Defence Services career. To further elaborate this point, it would be appropriate to mention that many of the young men of this institution have found successful business careers abroad and also in the country’s various other services like government institutions and the legal profession. Some of the figures, as available from the school records, are given below: –

The above statistics pay a tribute to the broad based education in which our young men are disciplined, taught and trained at this institution.

The first headmaster selected by the Committee, as earlier mentioned, was Mr.J.K.Kate, who was found an efficient administrator and a teacher and remained in the school from 1960-72. He put the school on a sound footing. Thereafter, Mr. A.R. Gupta, the Vice-Principal from Mayo College, took over in June ’72. He was a good teacher but, unfortunately, not a good administrator; hence the school suffered on this account for a short period.

When we took the present Headmaster, Group Captain A.J.S. Grewal-he put in lot of efforts and had to work hard not only to improve the discipline which once had gone down but also made tremendous progress on the academic side. He introduced several activities, which the school did not have had hitherto.

He has also done lot of plantation (thousands of eucalyptus trees), which very shortly will bring lakhs of rupees as income to the school every year. He is respected by his staff and has a very good personality.

Some of the important features of the school are highlighted as under: –
This is the only public school catering for a larger number of rural students in the Punjab.
This is the only public sc where English is optional at the time of admission and yet the results of ICSE and ISC are comparable and often better than those of the best public schools of India; and
This school still continues to be one of the cheapest so far as fees and other expenditure are concerned.

On this happy occasion of the completion of the first 25 years of the institution, we can proudly feel that this school i.e. ‘THE PUNJAB PUBLIC SCHOOL’ has rendered a befitting account of its existence, The Board of Governors and staff can look back with satisfaction over the academic and sports achievements of the school. I would, in the end, wish it further successes and many more laurels in the years to come.