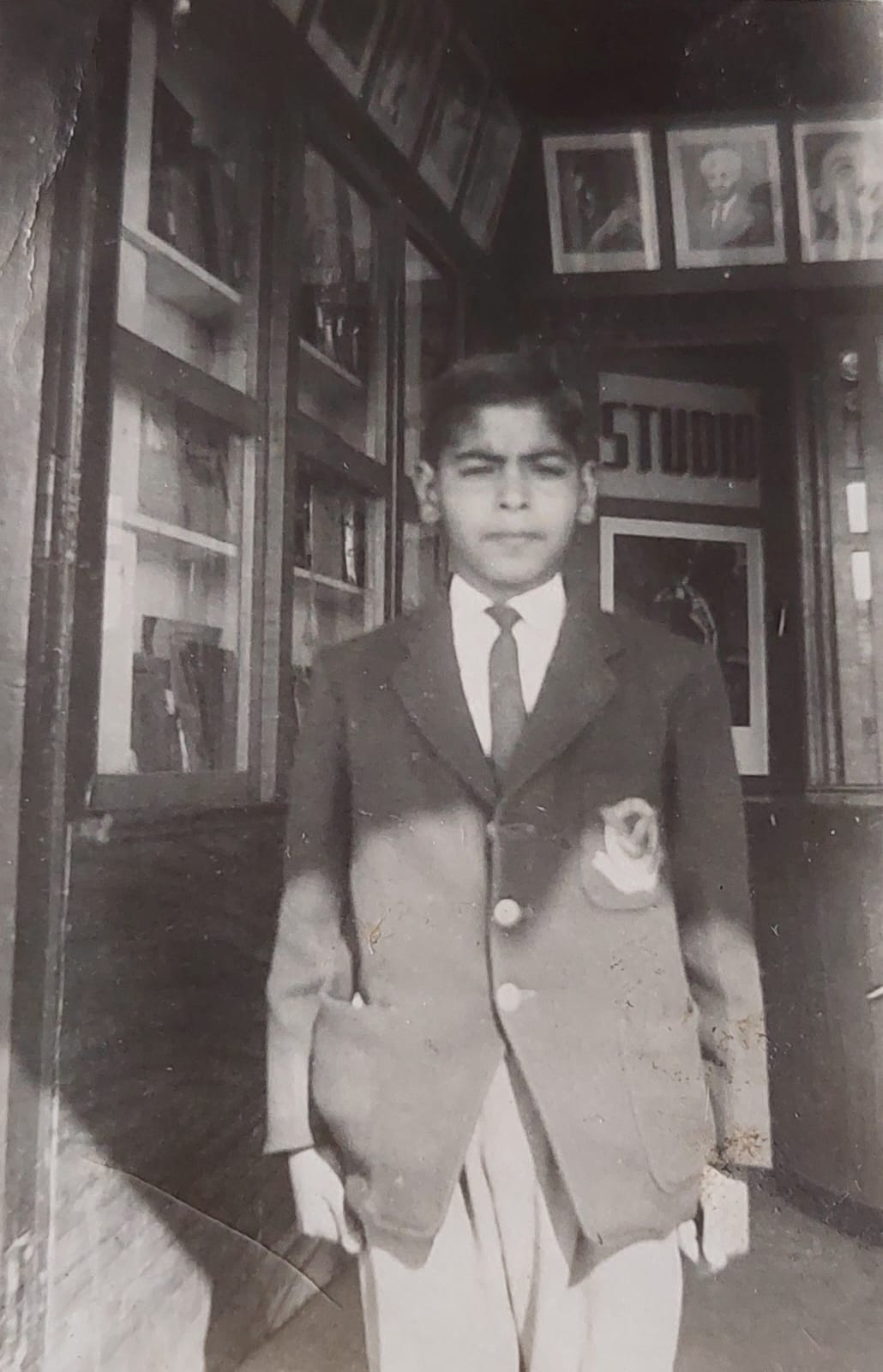 After passing out of school, he got admission in several colleges in Delhi, JNU, BITS Pillani etc. but  finaly, joined DAV college  at  Chandigarh.

Soon after completing first year at DAV College, he was selected by Ministry of Education for a Russian Govt Scholarship for the Integrated course of Master of Laws in International Law in Moscow. He was there as a student from 1971 to 1977.

While at the University, his love and affection for his alma mater, The PPS,  made him write wonderful letters to the school. The School had been his second home and family for seven most impressionable years. He wanted to share his experiences in foreign land with his family back at school.

These letters were published in the School Chronicle and make an interesting reading. I have made them subject of this article as well as an insight into Ashwani’s journey so far. (Jashanjot ,S-52,1967) 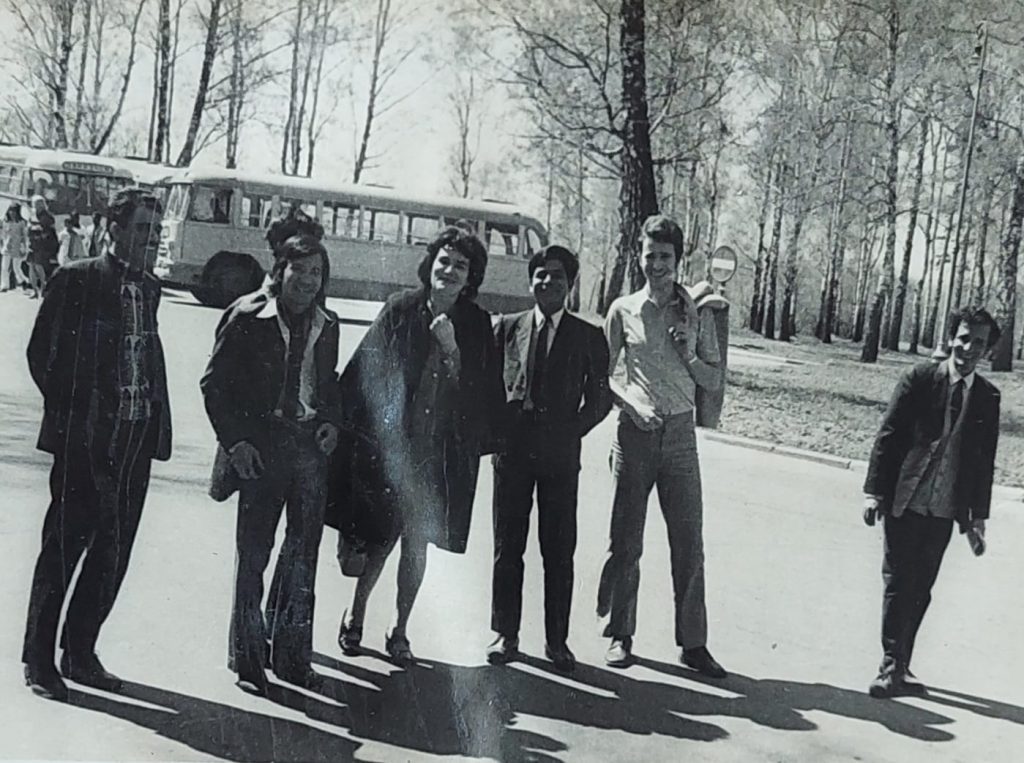 With friends and classmates at the University campus. 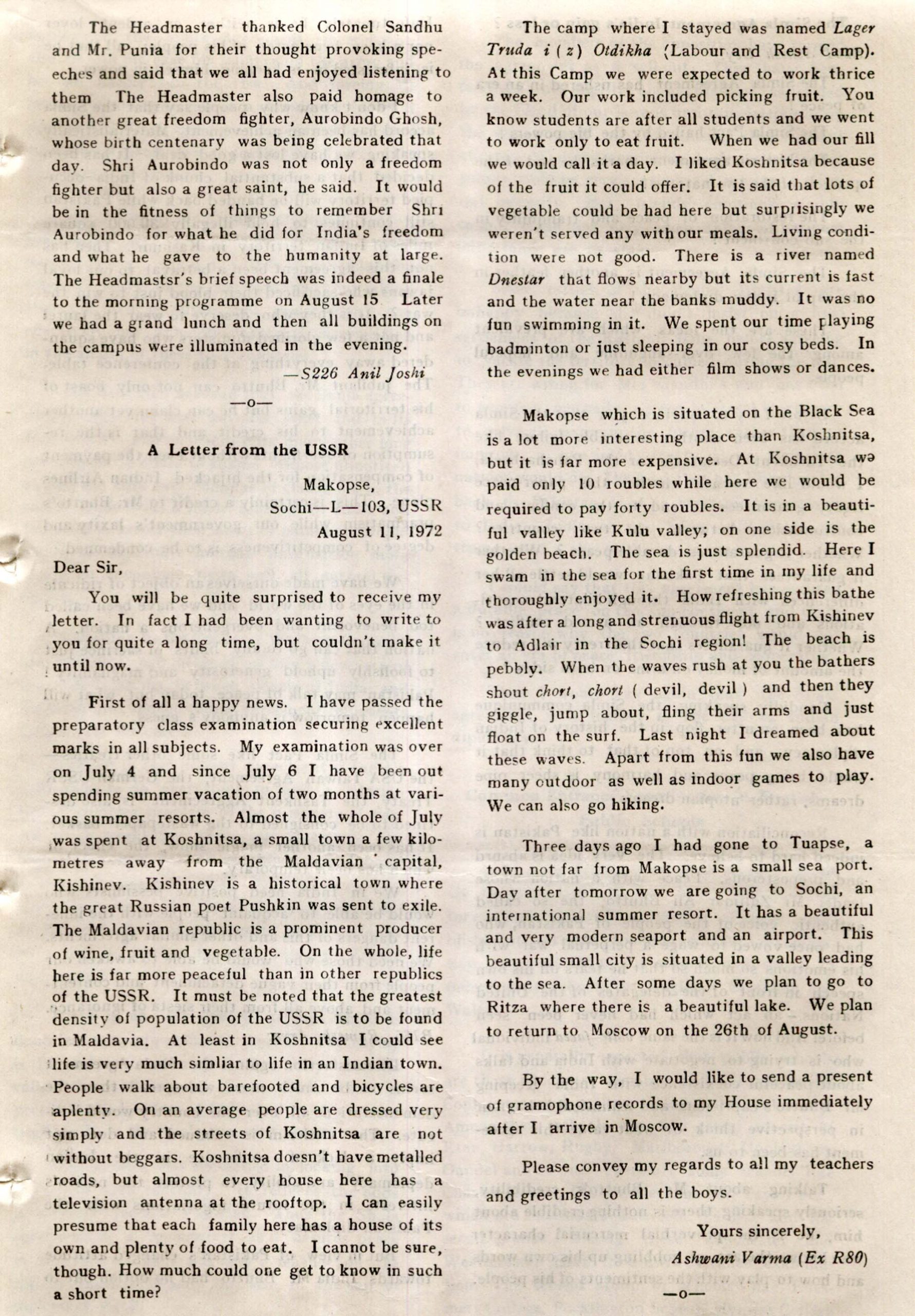 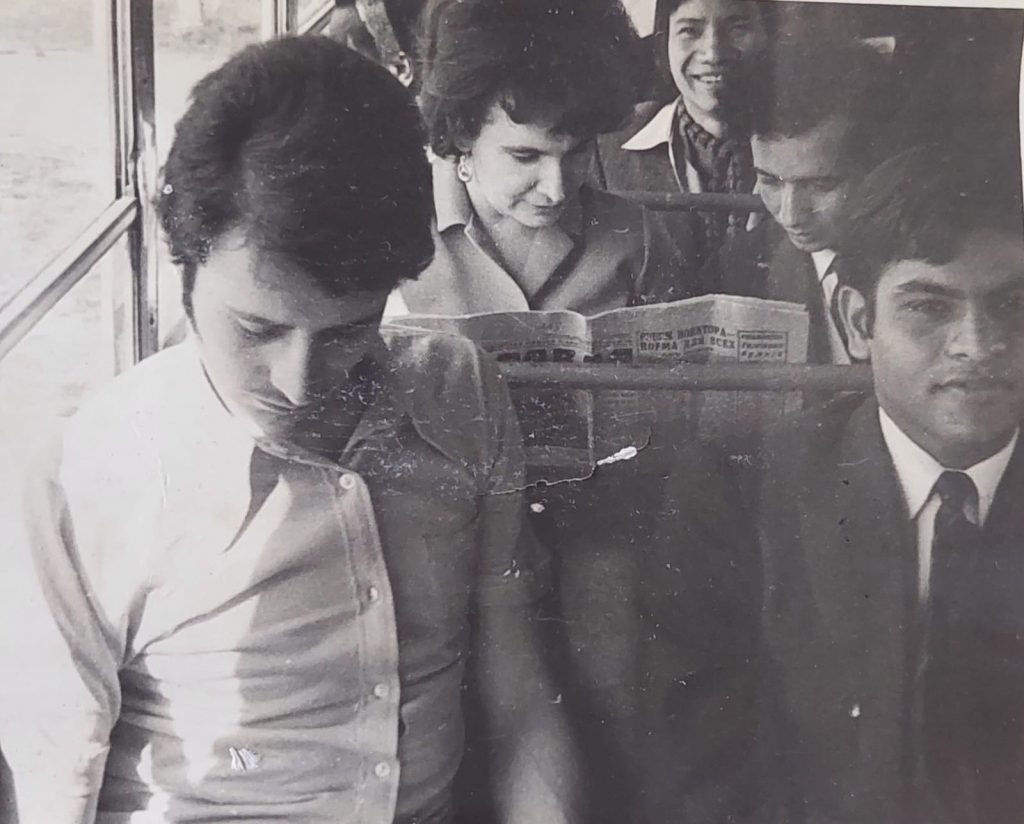 Riding the bus with fellow students in Moscow 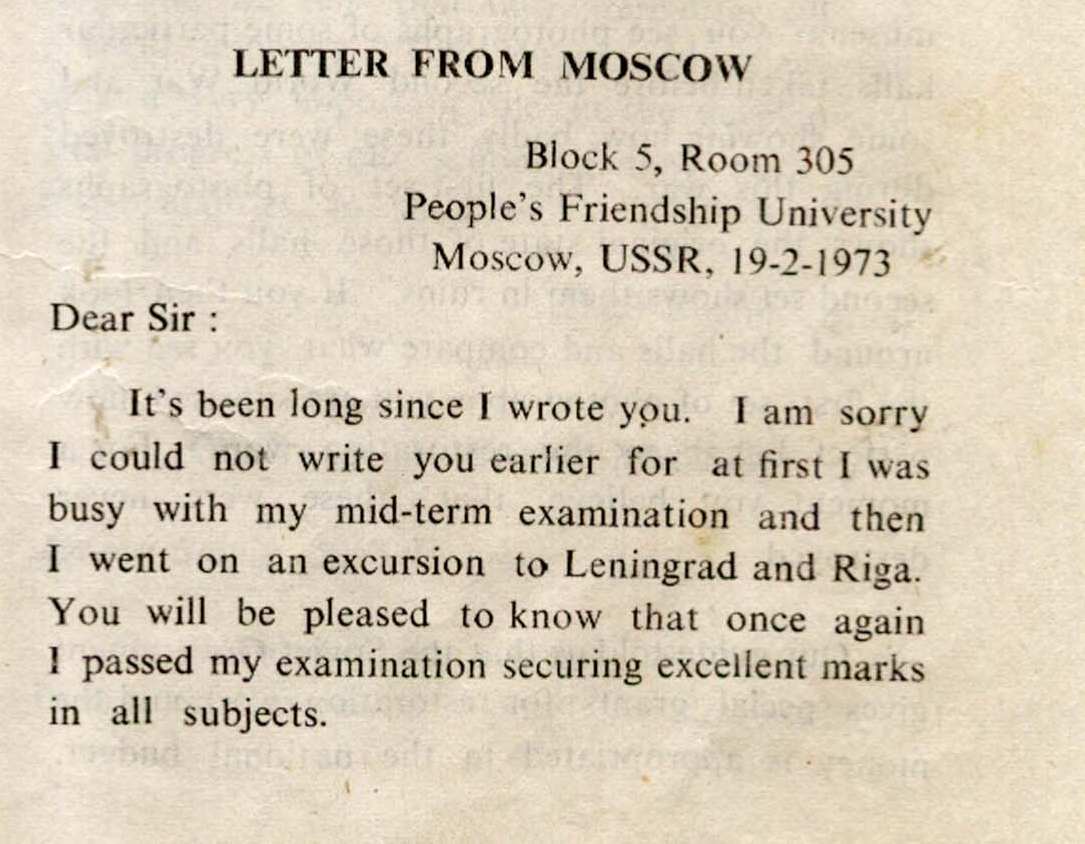 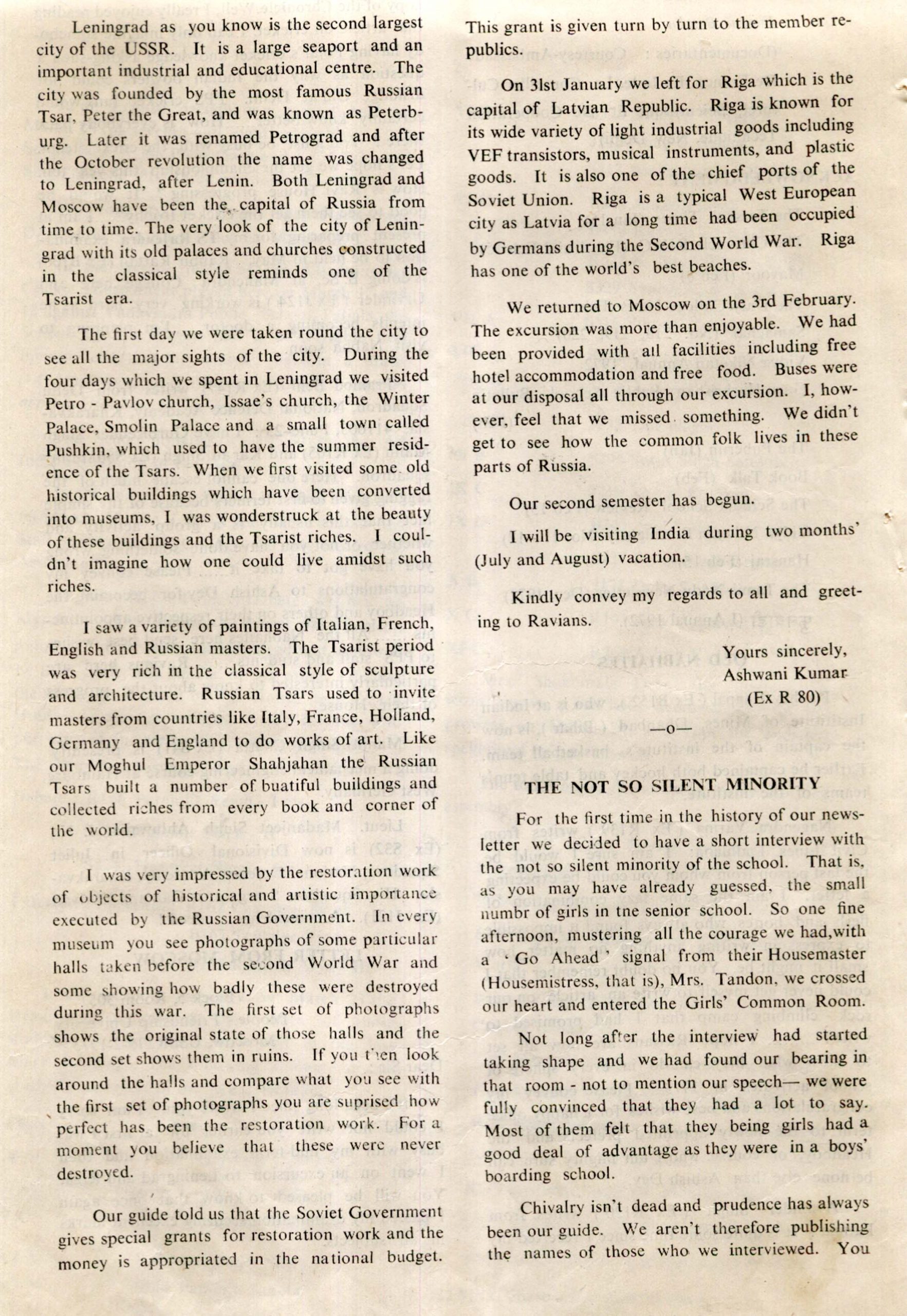 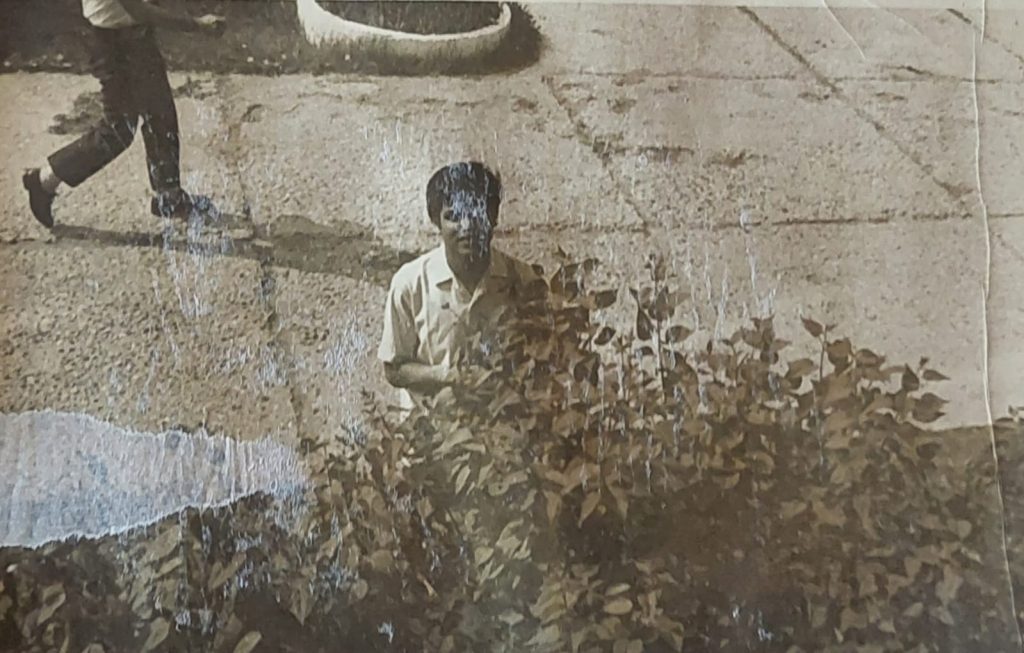 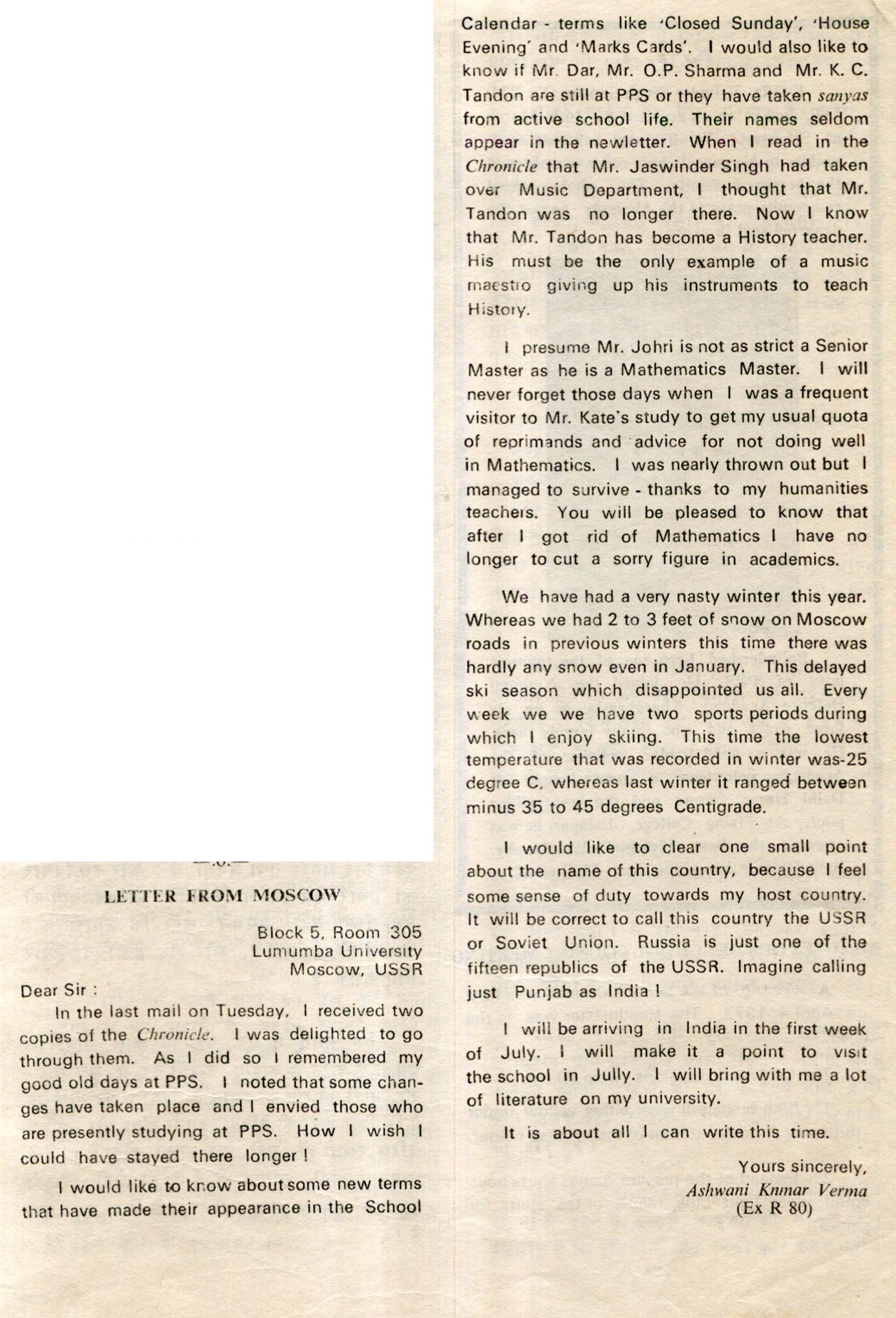 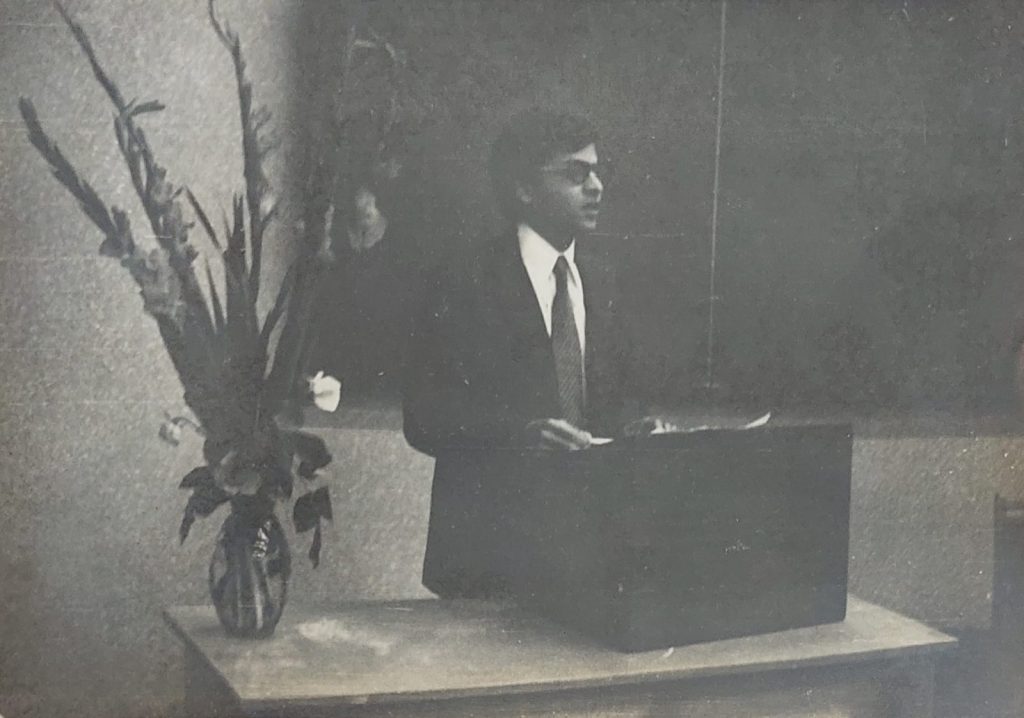 Perfect understanding by the Headmaster Mr. JK Kate and humanities teachers in shaping my future.

I belong to Nangal Township in the present Ropar district of Punjab. I was a recipient of Punjab Government scholarship. I was an active participant of extracurricular activities. I used to take part in House Shows, Group singing, Gandhi Jayanti and School functions. Music was my favourite hobby and used to participate in the Instrumental orchestras arranged by Mr. KC Tandon (music). I have sent a pic where Alka (daughter of Physics teacher IB Kakkar) and me are at both ends playing Israj. Jojo used to play Sitar. I was in the Airforce wing of the NCC and attended the Camps near Joginder Nagar and Dharamsala. I also attended the Rock Climbing camp at Manali, as also was part of the School group which crossed the Rohtang pass. Hampta pass crossing had to be abandoned due to inclement weather. 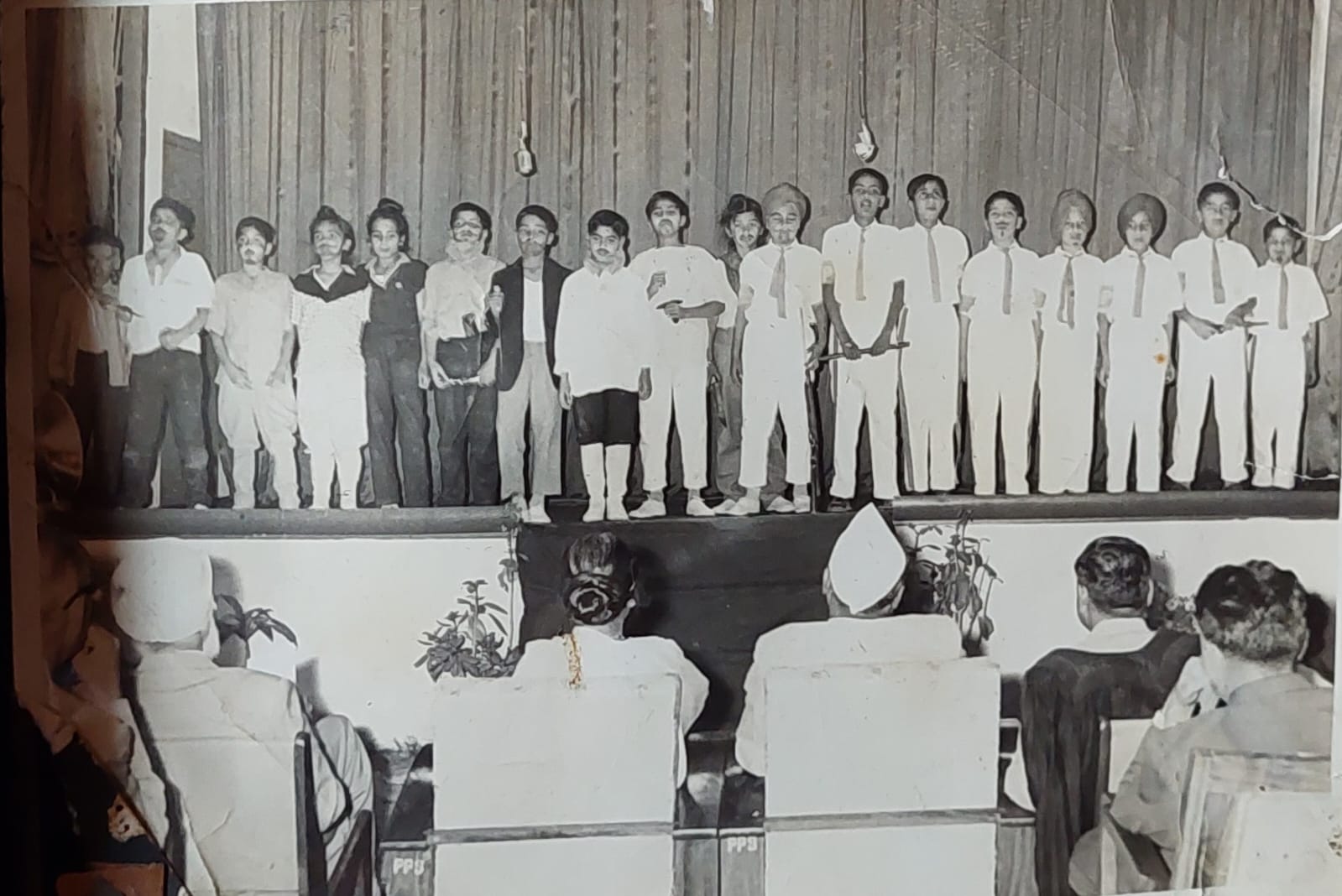 However, I was poor in Maths due to which Mr. Johri was totally against my continuance in School. One day Mr. Kate called me to his office and with great concern and affection stating that I was a well behaved and otherwise an intelligent student but I would have to improve my Maths to remain in School being the scholarship holder. However, with no aptitude for Maths and Science subjects, I failed in 9th class. There was a long discussion about my case in the Staff Room and they found out a way out. A re-test in Maths was held for me on reopening of the School after Winter break. This, I easily cleared. Thereafter, I was allocated the Humanities batch where I did quite well in studies.

Excellent cooperation of all staff in deciding a student’s future. I don’t think it happens today. , Yes, it was a very pleasant experience of the involvement of school teachers and the Headmaster Mr JK Kate,  in my foundation years. Had they not understood my academic bent of mind and not supported me, especially the Language and Humanities teachers, my life would have a wreck.

Ashwani, after completion of the said course, got an offer for higher education there itself as well also an offer of PhD in Stockholm, Sweden.

However, his parents got restless and hence returned home. On returning home, he appeared in the Civil Services Exams in 1978 and got IPS but was medically rejected for short height by few centimeters. 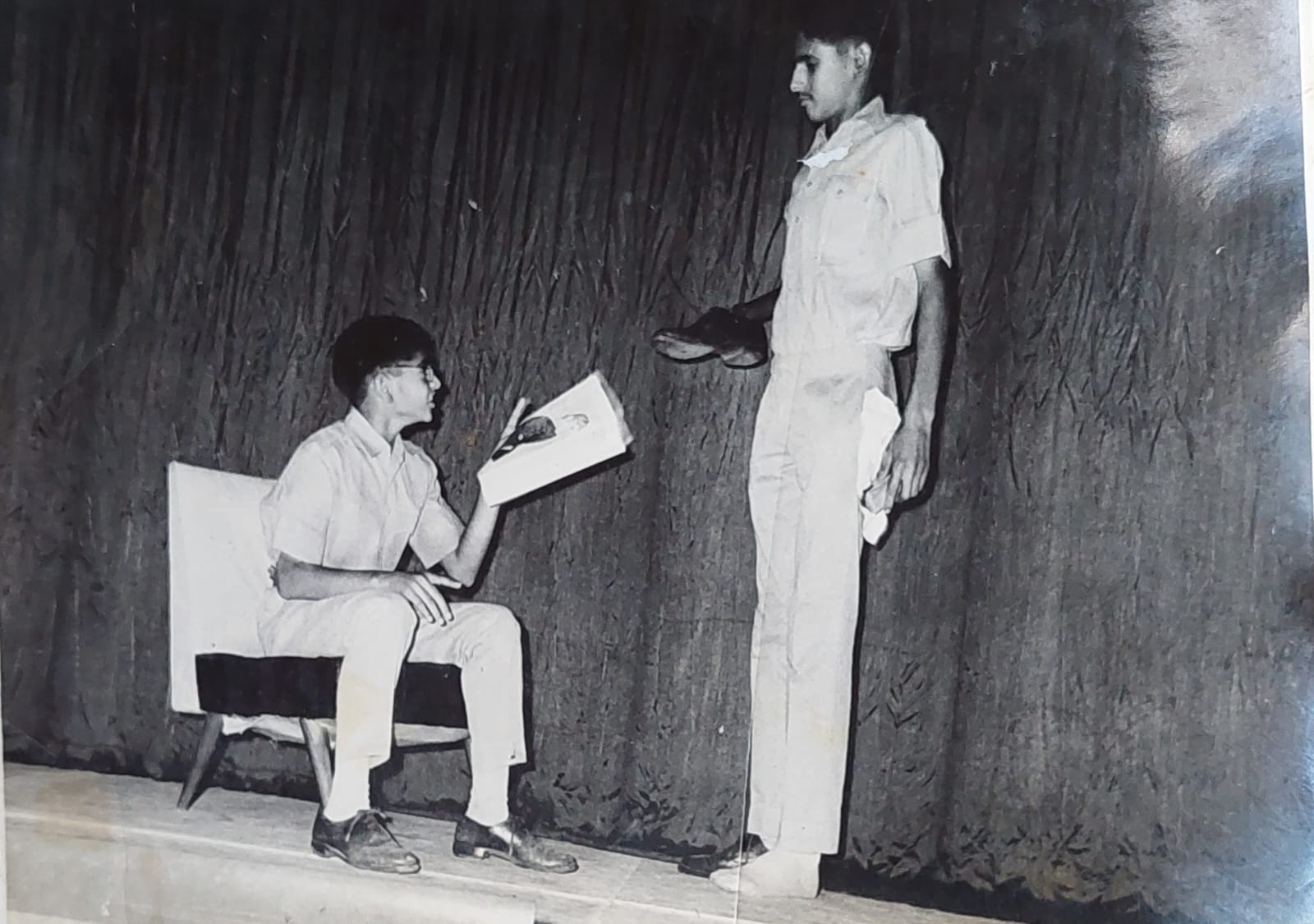 Acting in a school play

Simultaneously, he again appeared for Civil services and got into IDES. He retired from service in 2013 with last posting in Chandigarh. In between, he handled the Defence Export Promotion Cell in the Ministry of Defence from 1987- 1990 and was Provident Fund Commissioner, Gujarat from 1994-2000.

He finally, settled in Pune. Not wishing to remain idle, He joined ‘Rau’s IAS Study Circle’ in Delhi and is counselling the IAS aspirants. He has been there since 2018. 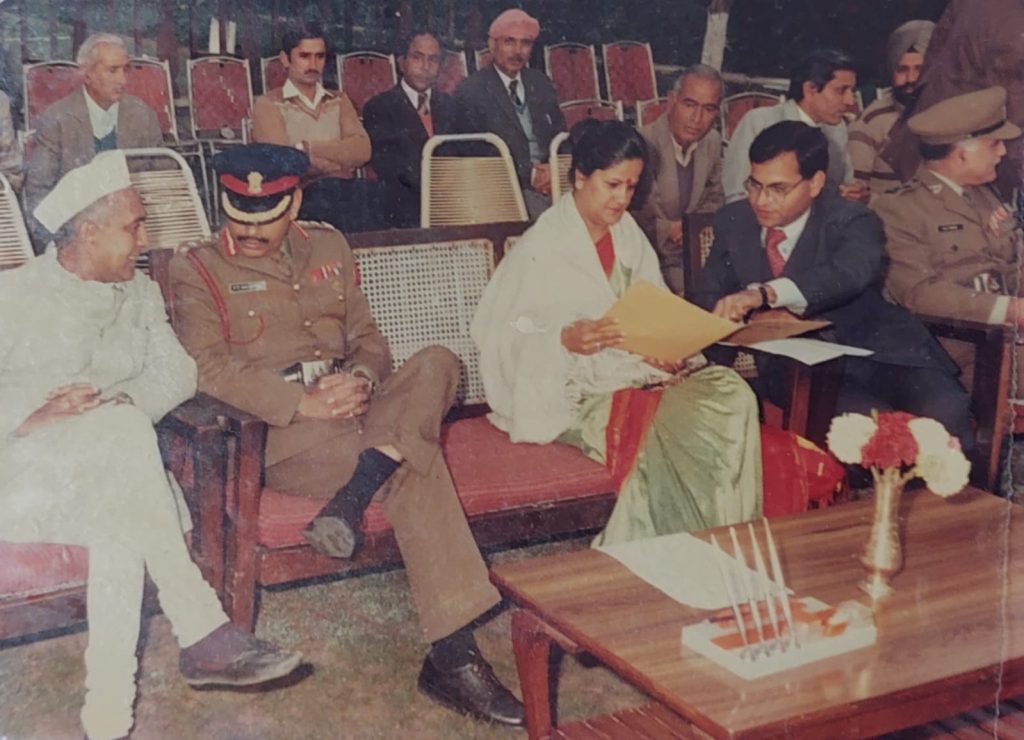 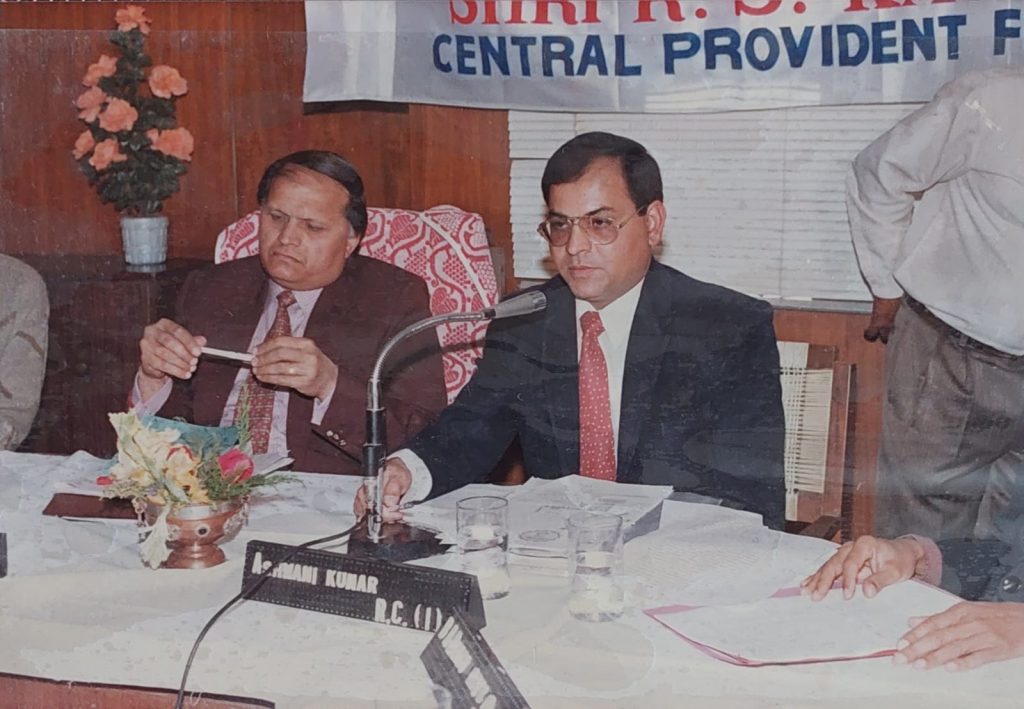 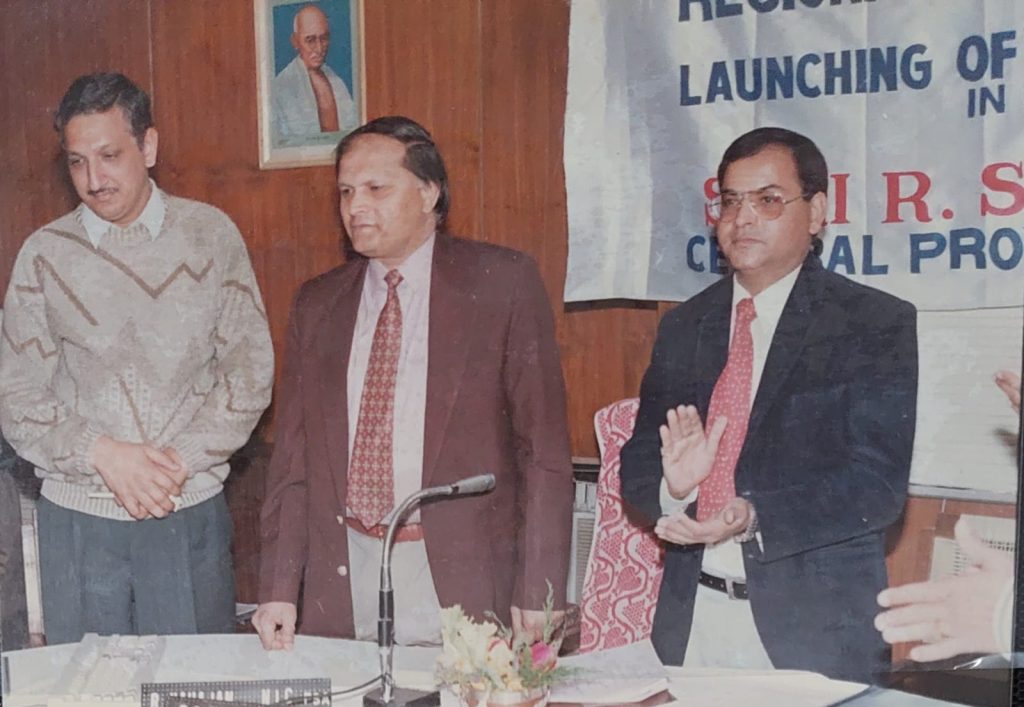 Sitting on the bed after fifty years where his bed used to be when he was in school. 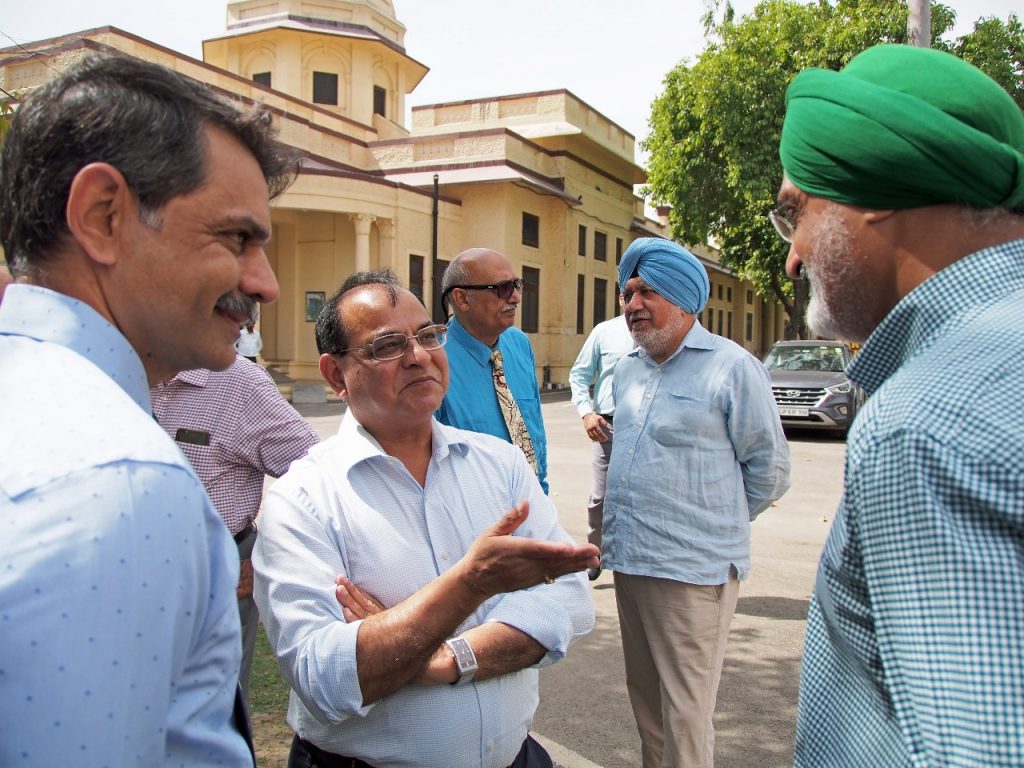 Interacting with the Headmaster Mr Jagpreet. In the back ground is Dr Sabjeet Sohi (B-115 with blue turban) from 1969 batch. 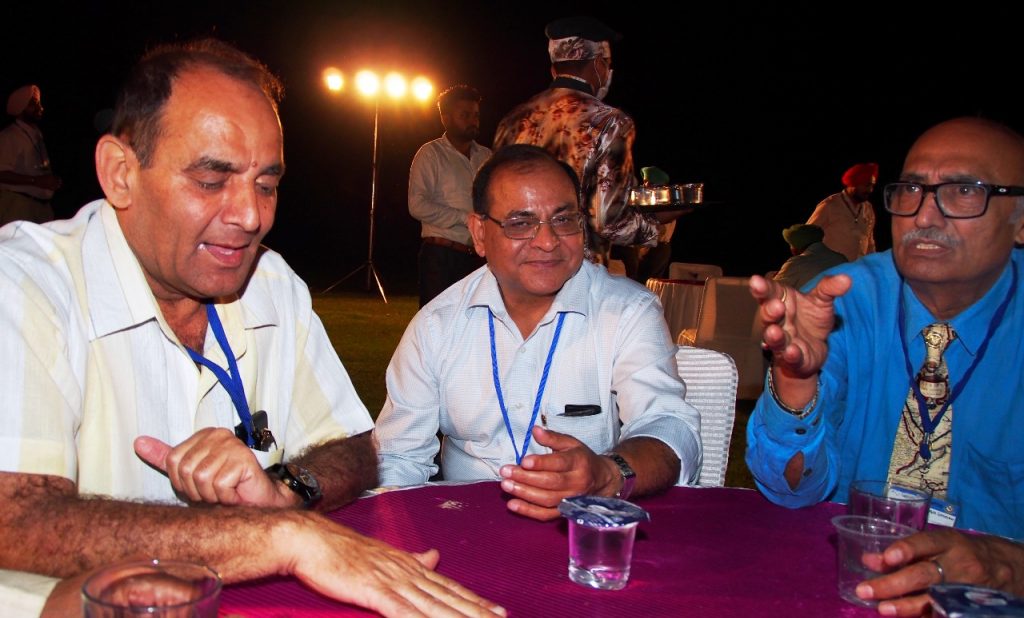 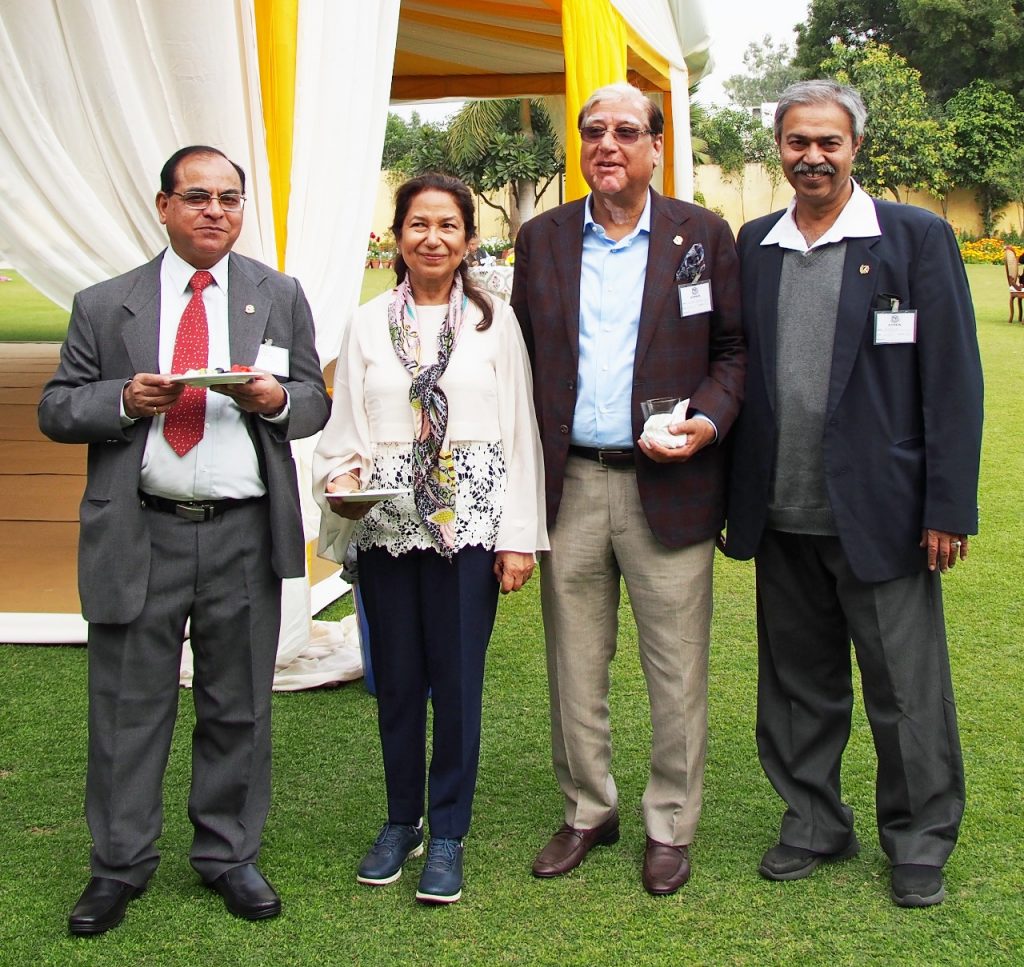