“I Dream of Being in The Army” 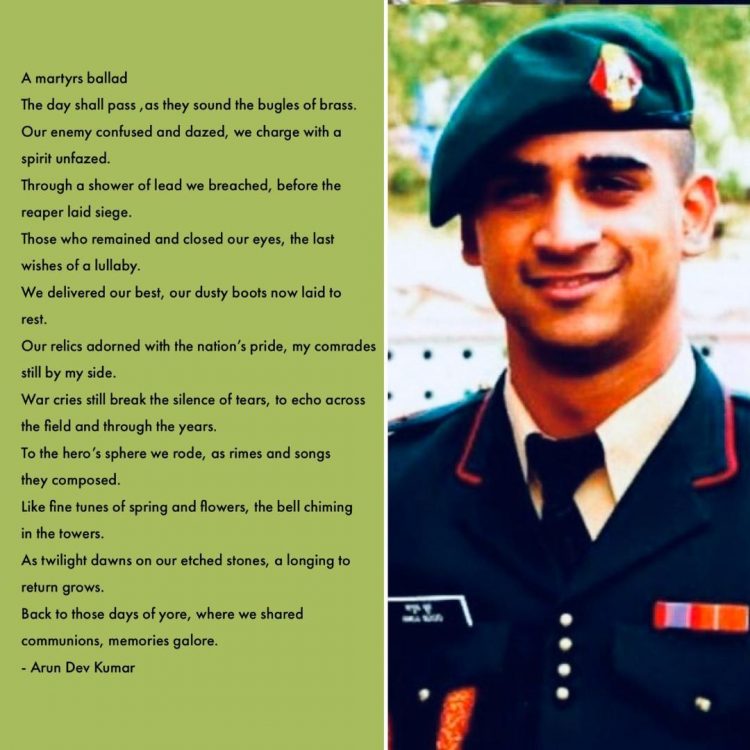 (The boy who dreamt of being an Army Officer while in The Punjab Public School, Nabha , offered the ultimate sacrifice for the sake of his nation.}

‘I Dream Of Being In The Army’

SHOHINI BOSE (From The Quint.com)

“I still have the slam book which Anuj had filled when we were leaving school. In the column which said, ‘I dream of becoming’, he wrote ‘An army officer’. The thing to note is that he wrote ‘ARMY OFFICER’ in capital letters, underlined it and put inverted commas. Such was his love for the nation and passion to achieve his aim.”
Dr Manjyot Singh Chadha, Major Anuj Sood’s Friend

Major Anuj Sood was among the five security personnel who were killed in an encounter in Handwara, J&K. His friends and school batchmates remember the passionate teenager who always dreamed of becoming a soldier.
Anuj passed out of The Punjab Public School, Nabha in 2008. After that he joined the National Defence Academy. His school friends Raghav Verma, Manjyot Chadha and Kamaljot were shocked at his sudden demise but at the same time proud of his supreme sacrifice for the nation. They recall him as a ‘bright teenager, a thorough gentleman and a dedicated soldier’.

Dr Manjyot Singh Chadha was Major Sood’s classmate and close friend. In fact his father Mr MS Chadha was a classmate and close friend of Anuj’s father, Brig CK Sood. Both the dads were also students at PPS, Nabha. Manjyot still has the slam book that Anuj had filled when they were in school. He recalls how in various column Anuj had penned how passionate he was about joining the forces. ‘He was always very clear that he wanted to join the Army,’ Dr Chadha recalls.

Another classmate Kamaljot Singh recalls how everyone in school knew he wanted to be a soldier, how he was passionate about his desire to join the forces and how he was never distracted from his goal. “Back in school if anyone asked Anuj what he wanted to be when he grew up, Anuj didn’t even have to answer that. Another friend would answer on his behalf, ‘We all know he wants to be a soldier.” 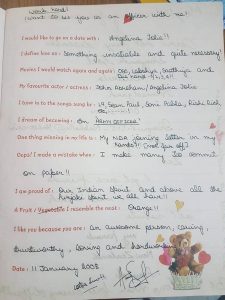 ‘He Believed It was his Destiny To Become A Soldier’

Major Sood’s childhood friend Raghav Verma recalls how he was always determined to be a soldier and had a craze for joining the forces. ‘When he joined the National Defence Academy after class 12 exams, we were all so proud of him. He will continue to be an inspiration for all of us,’ Verma recalled. Such was his passion that he was already half a ‘fauji’ in school. We used to tease him in school by calling him a ‘fauji’. 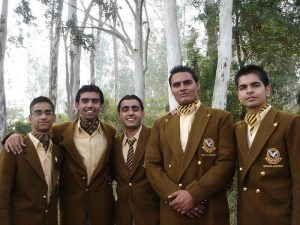 Not just his friends and school batchmates, even his teachers knew that joining the forces was his only goal in life. “What struck me about Anuj from the first time I met him, was how determined he was to join the army. His focus was very clear. He grew up looking up to his father Brig CK Sood. He always wanted to be like his father. He believed it was his destiny to be a soldier.”
Recalls. Russelljit Khatra, Major Sood’s House Master, The Punjab Public School, Nabha.

‘He Was Ready To Face The Enemy Head On’

‘When Anuj was posted in Kashmir, I had called him. I asked him isn’t it difficult and dangerous out there. every other day we hear there has been a terror attack in the valley. He replied, ‘This is why I joined the Indian Army’. I still remember these lines. He was always ready to face the army head on”.
Kamaljot Singh, Major Anuj Sood’s Friend 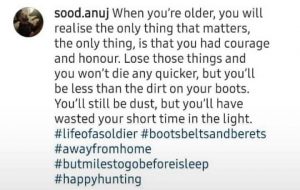 ‘Proud of the Indian and Punjabi Spirit!’

Contributed by Shruti Sood(Sister of Anuj)

The quote above is taken from the brave heart Maj Anuj Sood’s Instragram profile. Anuj never did grow old but the courage and honour that he displayed were abundant enough to last several lifetimes.

Major Anuj Sood was a second- generation NDA cadet. As a boy, Anuj’s hero was his father, Brig C K Sood, 58/A. He always dreamt of joining the NDA, and ultimately donning the OGs. So clear was his goal, that when, awaiting his confirmation of entry to the NDA, his parents made him appear for the AIEEE exams, he went and slept through the session, and did not bother to attempt a single question. When he finally received his acceptance letter from the NDA, his mother, (Late) Mrs. Ragini Sood, would often joke with him that once commissioned, he could not call her Mom anymore, and would have to address her as Ma’am after saluting her and only then would he get his breakfast. She was not around to see him don the Olive Greens, as she lost her fight to cancer in January 2011, six months before Anuj’s NDA POP.

He was a torch holder in all six terms at the NDA, and, like his father, was appointed CQMS of his squadron. He was excellent at drill, swimming, and horse riding and always strived to keep the Alpha Squadrons’ flag flying high in inter squadron events. In June 2012, he got commissioned in19 GUARDS. He excelled in all his training courses as a young officer. He was the ADC to GOC 14 RAPID from Feb 2016 till Apr 2017 and had also completed the Paratroopers Basic course with Instructor Rating.

He met the love of his life, Aakriti Singh, in Pune, and it was truly love at first sight as the night he met her, he messaged his sister, Shruti, “She’s the one I will marry!” That was in March 2015, and after dating for 2 and a half years, on 29 September 2017, the couple had a picture-perfect wedding in Yol Cantonment, Dharamshala, Himachal Pradesh – a homage to their Hill clan roots. Aakriti also comes from a prestigious defence family, her father Commander Kashmir Singh was a Marine Commando in the Indian Navy, and her grandfather had served in the Indian Army, 3 PUNJAB being a veteran of 1962, 1965, 1971 wars and had been on UN assignment to Africa, retiring as a Subedar.

volunteered for a posting with 21 RR (GUARDS) to fulfil his dream of operating in CI/CT Ops. He had been serving as Company Operating Base (COB), Zachaldor Company Commander, also known as the Rajwar Handwara Jungles Tiger, since 04 Mar 2018. He was responsible for plugging one of the main infiltration routes into J&K. Prior to the fateful incident on 02 May 2020, Maj Anuj had completed multiple such operations successfully. He had, in fact, completed his stint and was due for a posting, but the COVID-19 lockdown announced by the Army on 16 March, delayed his move out of the operational area. He had been operating in the jungles for more than five months as against the normal three for R&R and his leave had been rescheduled first for 18 Mar and then for 15 Apr. He was scheduled to visit his old man on 03 May and then fly out to Pune on 10 May. But destiny willed otherwise.

A wreath laying ceremony was organised at the NDA. The Commandant NDA, Lt Gen Asit Mistry, AVSM, SM, VSM paid homage on behalf the entire NDA fraternity to the fallen brave heart. The official news release said this of Maj Anuj, “Demonstrating unparalleled courage and exceptional devotion to duty while making the supreme sacrifice, Maj Anuj Sood has lived up to the motto of NDA Service Before Self. Today as his name gets etched in the four walls of sanctum sanctorum of Hut of Remembrance, his martyrdom will continue to inspire future generations of NDA cadets.”

(written by Anuj for The School Chronicle before passing out) 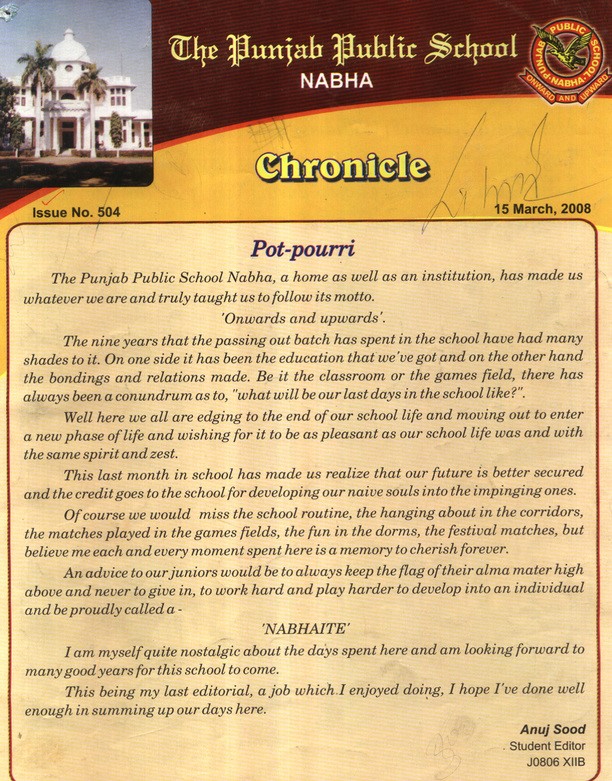 To watch the live video of Maj Anuj Sood’wife receiving the honour from honourable President of India, on 23 Nov, 2021 click on the link below :