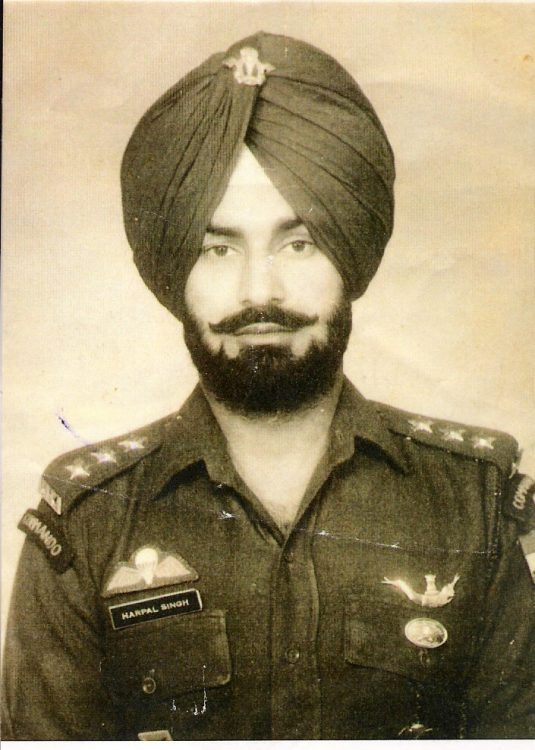 (Read about this PPS brave heart and his indomitable spirit. Handsome, Smart, Good friend and a sympathetic human being. Popularly known in his Army circles as ‘ROPAR KHALSA’ or as “Pali”.His bravery inspired a journalist Manvender Singh to write an article “An Ode to the Indian Soldier” in The Pioneer.)

A man born in a Jat Sikh family was cut for a courageous role in his life. Born in village Macrona near Chamkaur Sahib in Ropar District, he was aware of sacrifices made by ‘Sahibzadas’ of ‘Guru Gobind Singh Ji’ and was always ready to do something notable in life. His father Maj Pritam Singh was a very good soldier and prominent social figure of the area. He had one brother and three sisters.

Harpal after initial education, got admission in The PPS Nabha in 1965 and passed out after completing school education. Of a very friendly nature, Harpal was very popular in PPS, where he was affectionately called “Palli”. An outstanding sportsman through out, Harpal crowned his PPS years (1965-1972) by becoming the School Head boy.

He was commissioned in the army in 1976. He was allotted  the elite “1st  Para Regiment” (commando) of Indian Army. He did extremely well in his courses in the army and specialized in ‘Deep Sea Diving’. Except J & K, he served in almost all operation theaters particularly east. He was popularly known as ‘Palli’ in army too and was a handsome man, a smart officer ,sincere friend and a sympathetic human being.

He married in Jan. 1984 but blissful marriage could not last due to his untimely death.

In 1988 Indian forces were inducted in Sri Lanka for OP PAWAN (as IPKF) and his unit was in vanguard. Firstly , he was assigned duty of security of Sh. JN Dikshat (India’s High Commissioner)) who amply appreciated his role and immensely liked him. Palli had no enemies but only friends.

His role as described by his CO

“Harpal was a brave man and till the end he remained so. A very brave man, indomitable and courageous. We were descending by helicopter into a patch of jungle near which it was believed that a LTTE camp was located at about 0950 hrs. on 23rd June morning. Harpal had volunteered to go first and was standing by the winch. We had an armed helicopter gunship giving protection overhead. As the M18 helicopter hovered at 15 to 20 meteres above the ground the LTTE men who had been hiding under the trees stepped into open and fired automatic weapons at the helicopter, Harpal who was at the open rear end by then, fired back,, exposing himself and was hit in the chest, the bullet lodged in his heart and he breathed his last. The entire unit feels that the bravery of Harpal drew the entire force of the enemy to himself and gave his fire so that others survive. He gave his life in upholding the finest tradition of the army and honour of the country.”

Chief of the army staff while condoling the death remarked that Harpal laid down his life as a true soldiers doing his duty not caring for his life.

This article below, was written using the brave Soldier Harpal Singh as focus, by  Manvender Singh a Journalist who knew and admired him.

AN ODE TO THE INDIAN SOLDIER

While India has chosen to forget the sacrifices of its soldiers in foreign land, Sri Lanka has erected a memorial in honour of the IPKF’s fallen heroes. I was on the lookout for Harpal’s name. (incidentally an Old Nabhaite see below who is the inspiration for this article)

Like all those who knew him I too had been devastated by the loss of the ‘Ropar Khalsa’. He had that infectious persona. I had last seen him at his unit mess, during the 1987 cricket world cup. Even as the country partook in its cricket craze, there were those who didn’t have that luxury, as they were at war for India.

Harpal didn’t want to remain in the rear, looking after his unit ladies and children. An officer of 1 Para Commando, Harpal lost his life during Operation Pawan in Sri Lanka. His battalion, like countless others, had been part of the Indian Peace-Keeping Force that ended up fighting the Liberation Tigers of Tamil Elam when they had gone to keep the calm in the island.

Nothing captured the irony and the idiocy of the situation more than an officer injured early in the fighting telling me later, “I was injured by the LTTE who were using arms and ammunition supplied by India, and saved by the Sri Lankan Army who had been supplied by the Pakistanis.”

But it is not for the soldier to question political decisions, however bizarrely they may turn on their head.

A dear friend, Harpal had been the subject of the first article I had written about the IPKF in my early days as a journalist. It was on ode to Harpal, by name, and through him to all the others of the Indian Army who had fallen in a battle they had hardly prepared for.

So when I learnt of the memorial to soldiers of the IPKF, a visit there became inevitable. To bow my head, say a prayer, pay respect, and search for names that carried memories of fondness. And there it said –Capt H Singh PARA. Touching, and I was grateful.

Standing at the foot of the memorial I gazed in awe at its beauty and solemnity. Officers and jawans etched in perpetuity, white on black, and from across the country. There are Kashmiri names, just as there are Naga names. All casualties of a political decision to battle those they had gone to protect.Every infantry regiment, and more, was recorded there. Tank men who volunteered for infantry duties, and didn’t come back to India are remembered for their valour. I saw the name of Col Chabra, whose son now dons the same uniform of the same battalion as he did while fighting for his country. It was humbling to stand before them, all together in memory, for posterity.

When the awe and pain of going through the names subsided, I couldn’t believe myself that there was, finally, a state inspired and funded war memorial to Indian soldiers. The fact that a Government-created memorial could be so beautifully made was as hard to believe as seeing one constructed in the first place. It is not a citizen’s initiative like, for example, the memorials in Chandigarh and Bangalore. It has been inspired by a national Government, funded and constructed by its agencies.

Even as the Government of India resists the pressures of its soldiers and citizens to make a post-independence war memorial, Sri Lanka has recognised the significance of the Indian soldiers and sailors who died for its integrity from 1987 to 1990. The memorial has been made entirely from Sri Lankan funds, architectural consultants, and the contracting agency is the Sri Lanka Navy. Creditable when one considers the absence of any Government-made war memorial in India.