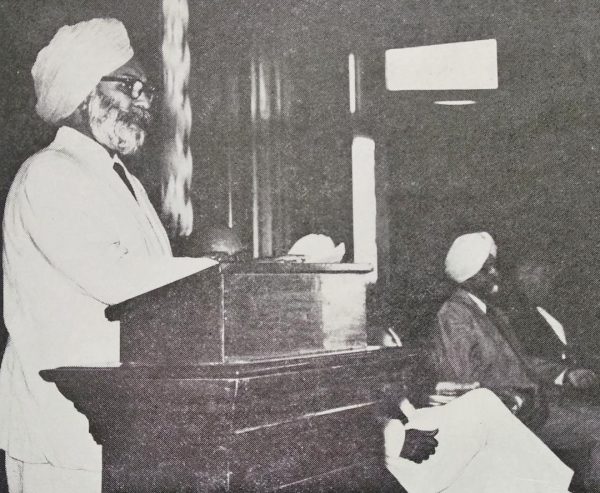 On Baisakhi Day 14th April The school began with an address by the Lt Gen Kalwant Singh on behalf of the governor who could not make it that day. He began his address by stating that, “I am here today, at the request of and on behalf of the Chairman, Board of Governors of the School – The Governor of the Punjab to preside at the beginning of this term – which is really the start of this School.”

Letter from the Chairman (Governor of Punjab) to Gen. Kalwant Singh

I have your letter of 1st April, 1960. I am glad that you have agreed to preside over the function in connection with the commencement of the School on 14th April, 1960.

FIRST OFFICIAL DAY OF THE SCHOOL, THEN ‘THE SAINIK SCHOOL, NABHA’

Mr Kate, after extending a warm welcome to the distinguished guests lauded Sardap Partap Singh Kairon for his zeal and untiring efforts to establish the school. He also thanked the Punjab Government and the managing committee of the Post War Services Reconstruction Fund for the palatial buildings and financial assistance. He then outlined the aims of the School

The boys put up a variety entertainment programme for the guests in the evening. Considering the fact that students had arrived just four days before, they managed to stage a praiseworthy performance. Mr Kate had asked Miss Pannu to help the boys in preparing a Bhangra performance. The convent educated Miss Pannu found herself wanting on account of never even having seen a live Bhangra performance before, but Parminder Nagra (S-1) inspired other boys to come up with a scintillating display and Mahesh Kumar spiced up the performance with his creative vocal interludes (bolis) such as:

I am here today, at the request of and on behalf of the Chairman, Board of Governors of the School – The Governor of the Punjab to preside at the beginning of this term – which is really the start of this School.

A year ago, our Chief Minister, at a meeting of the Post War Reconstruction fund at Raj Bhawan, Chandigarh, suggested the starting of a School in the Punjab on the lines of the Doon School. I fully supported him. I was asked to formulate a Scheme to start this School. I gladly accepted this undertaking as I felt there was a definite requirement for a School, run on Public School lines for the sons of serving officers, J.C.Os., and O.Rs. as also the Retired officers, J.C.Os and O.Rs.

I was particularly interested in the Scheme as the bulk of the money which has been set aside for this School by the P.W.R.F Committee had been put into a Fund during Second World War for the collective benefit of the Other Ranks, who had served during that War, or their dependents. It is, therefore, in the fitness of things that this School should be started as a sort of a memorial to those belonging to the Punjab and who served during the Second World War.

I mentioned earlier that a year ago the decision was taken to start the School. It is no ordinary achievement …….. I must express our gratitude to the Chief Minister and the Punjab Government who had given the School these palatial buildings as also the Guest House. My successor in Western Command – Lt. Gen. P.N. Thapar is to be thanked for getting the Scheme for the establishment of the School worked out. I had only given the outline plan to the S.O.I. Education – Col. Mukand. He worked out the plan in detail. I am so happy that I have been able to implement it. I was assisted by my old friend Col. S. Naunihal Singh Mann, Mr. Achreja, Secretary to Governor, and Major Bhagat, officiating S.O.I Education, in selecting the Headmaster and to select the site and buildings and in the preparation of the prospectus and Rules and Regulations.

The choice of the Headmaster has fallen on Mr JK Kate whom I first met at Sanawar ,who is an educationist with a vast experience of Public School Administration. That the School has actually started functioning is due in no small measure to Mr.Kate who starting virtually single handed has accomplished a truly formidable task in an incredible short time. 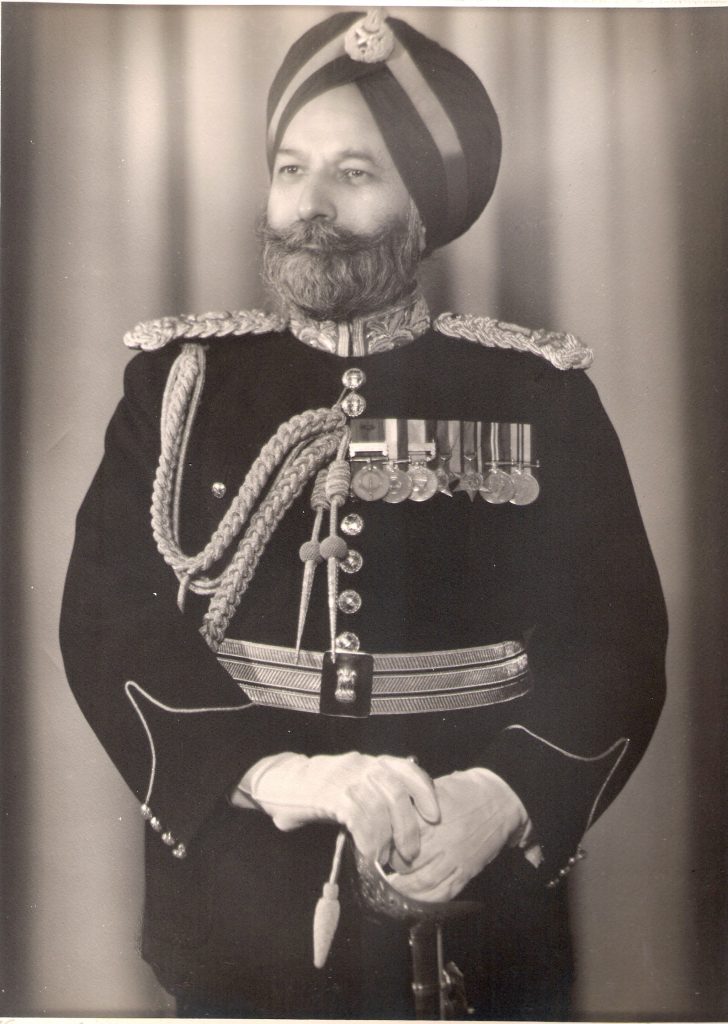 We owe it to him and to his staff who has been here since 1st Jan, who have been assisting him to get the show going. I know the amount of work he has put in, initially single-handed, to start the school. For example he has had to get each and every bit of furniture that we are using today. I would like to thank him very much indeed for what he has achieved in such a short time with a limited number of staff.

The strength of the school will in the first instance be restricted to 200,of which number 120 vacancies will be reserved for the sons of ex-servicemen as well as of serving personnel of the Indian Army, Navy and Air Force, belonging to the Punjab. It is intended to indicate that joining the NDA will be compulsory. Boys must work hard and make the fullest use of the opportunity afforded to you, for India is in dire need of young men of character and initiative to help in the development of the country. I wish the school all success and hope that it may produce such men of sterling character as the country, with its newly found freedom so badly needs.

Now, the AIM of the School; it is to provide a Public School education to deserving sons of ex-servicemen, serving personnel of the Defence Services and civilians, with a view to developing them in body, mind and character and preparing them academically for entry to the National Defence Academy or for any other suitable career. Another object of the School is to instill in its students a spirit of loyalty, devotion and patriotic service to the country, and to inculcate qualities of leadership, personality, and discipline and team- spirit. (In addition to this I would like the Headmaster and his staff to pay particular attention to building of Character).

Military bias in the School is intended to indicate that joining the NCC is compulsory for all boys. We will prepare you my young friends to take your place among the leaders of the future and will try to equip you for the Battle of Life. You are free to choose a Military Career if you want to but there is no compulsion.

You, my young friends, especially those who have been awarded scholarships, must work hard and take full advantage of the opportunity you have been given. In our country there is a great requirement for young men to come forward and help in the development plans being initiated by our Government. We have given as per the Headmaster’s report  35 scholarships. I would have liked more scholarships, since funds are limited we cannot at present increase the number

I hope you will have a pleasant stay here and you will take full advantage of the facilities being made available not only as far as studies are concerned but also hobbies, games and outdoor activities.

Finally a word of advice for the staff. You must all work together as a team and not individually for the benefit of the school.

(I wish you all success and may this school grow from strength to strength and produce young men of character and ability which our country with our new found freedom needs.)

Thank you very much, Mr. Kate for the welcome you have given to my wife and me.

( This  speech is some what different from the speech printed in Silver Jubilee Souvenir of The PPS. The parts in bracket are extra in Gen Kalwant Singh’s personal file where I could see his original typed speech with hand written corrections. Maybe, the souvenir version was edited. See images below- Dr Jashanjot (S-52,1967) )

FROM PERSONAL FILE OF LT.GEN.KALWANT SINGH 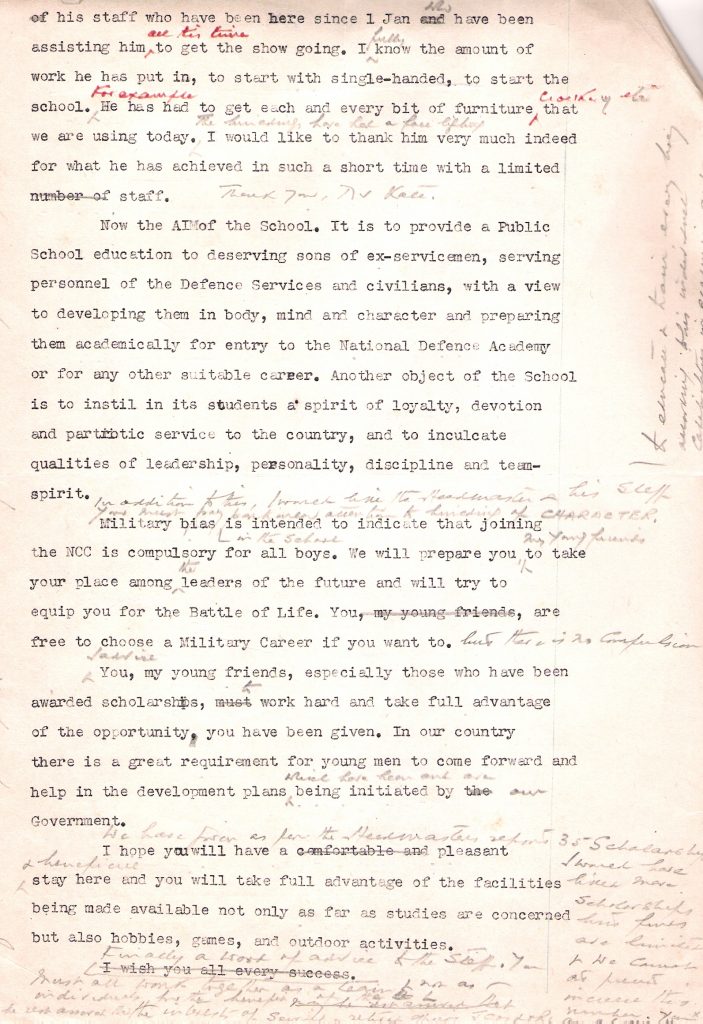 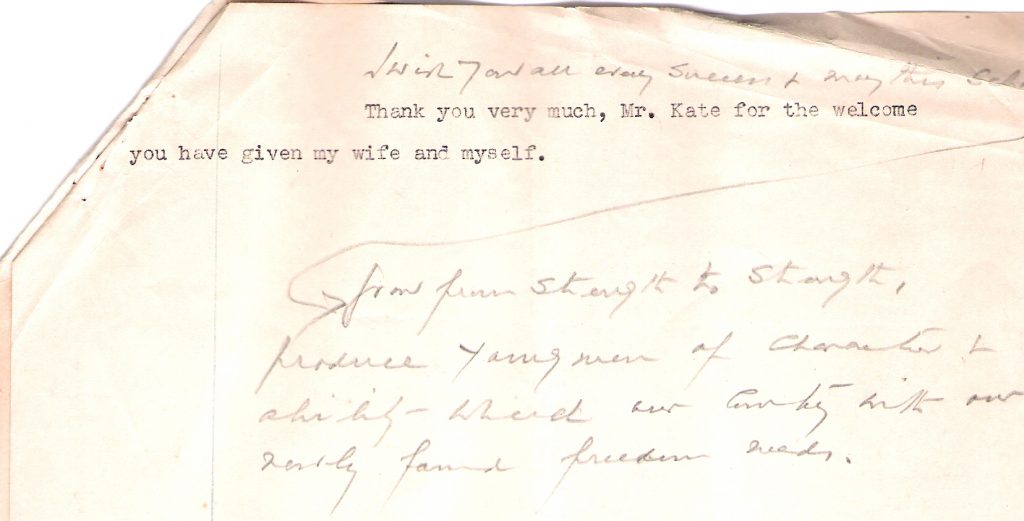 BELOW ARE THE COMPLETE PROCEEDINGS OF THE FIRST DAY OF “THE PUNJAB PUBLIC SCHOOL,NABHA” ON !4,APRIL,1960 INCLUDING VARIETY ENTERTAINMENT.

AS PUBLISHED IN THE CHRONICLE OF JUNE,1960: 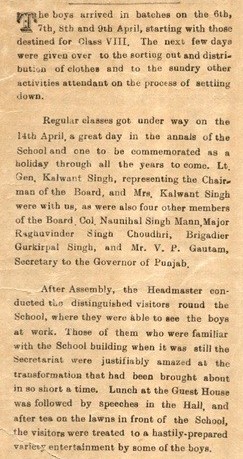 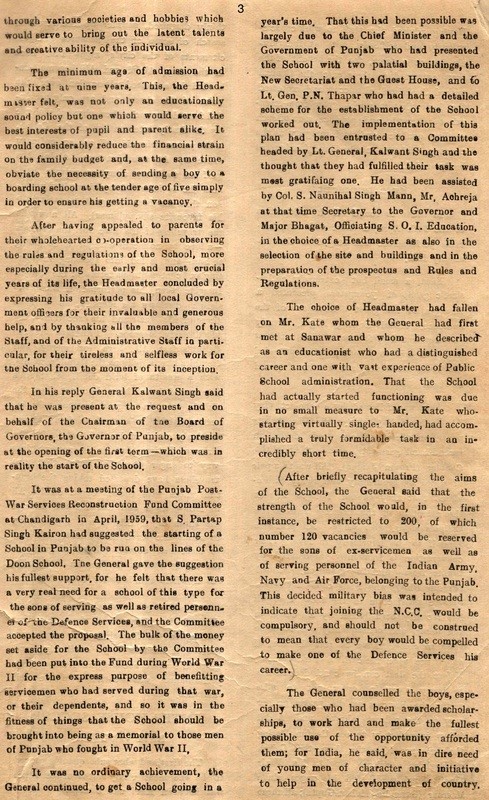 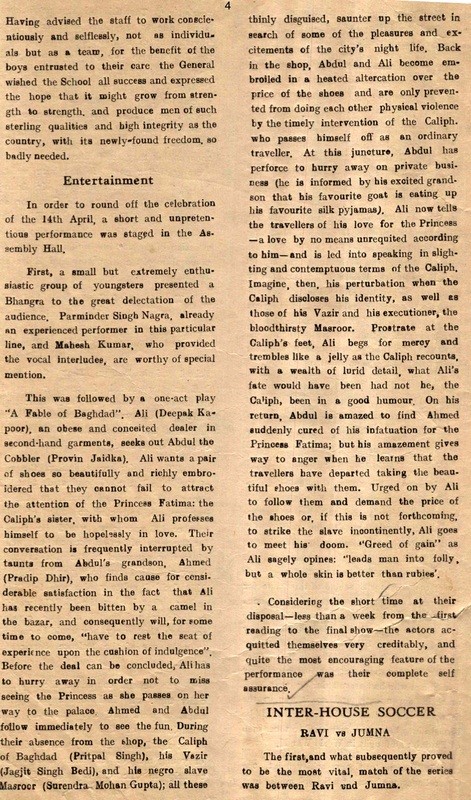