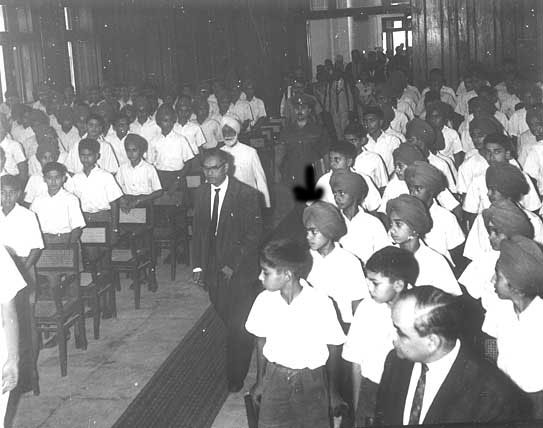 My first day at PPS Nabha 16 Jan 1963 is very vividly etched in my mind because it did not take much time for the school to embrace me with such care that one just forgot home.

My father and me bid farewell to the family at home in Chandigarh and boarded a bus for Nabha with a black steel trunk which accompanied me for the rest of my life till I hung my Air Force Blues on 31 Dec 1996 as a Wing Commander. That day was a very memorable day for me as I was leaving home for the first time without the knowledge that the previous day would be my last day at home with my mother, father, brothers and sisters.

On reaching Nabha we got into a rickshaw and reached the school premises, the Senior School Main Building, from where after some formalities, we were sent to the Junior School. The little boy that I was got really over awed by the majestic school building and wondered what a grand place this would be.

I was taken to the head mistress Miss Malkani, who welcomed me like her own child and then handed me over to the Matron who would take care of my kit that was issued and had my trunk put into the box room. On completion of the kit issue formalities one was shown the Sutlej House dormitory and allotted a bed.

When we came out, we met Rankesh Kapoor (S-66,1968) another Sutlej House boy who had spent a year in the school. My father without my realisation, bid me farewell and was gone. After a while when I realised that he had left for Chandigarh, I started crying but before one could say Jack Robinson, Rankesh was quick in taking me to play with a ball and later into the dormitory to meet other boys.

Miss Lamba our house mistress took care of us while in the house. It goes to the credit of each and every single teacher that we little boys were so well loved and cared for, that we never felt we were away from home. Junior school had become our second home. 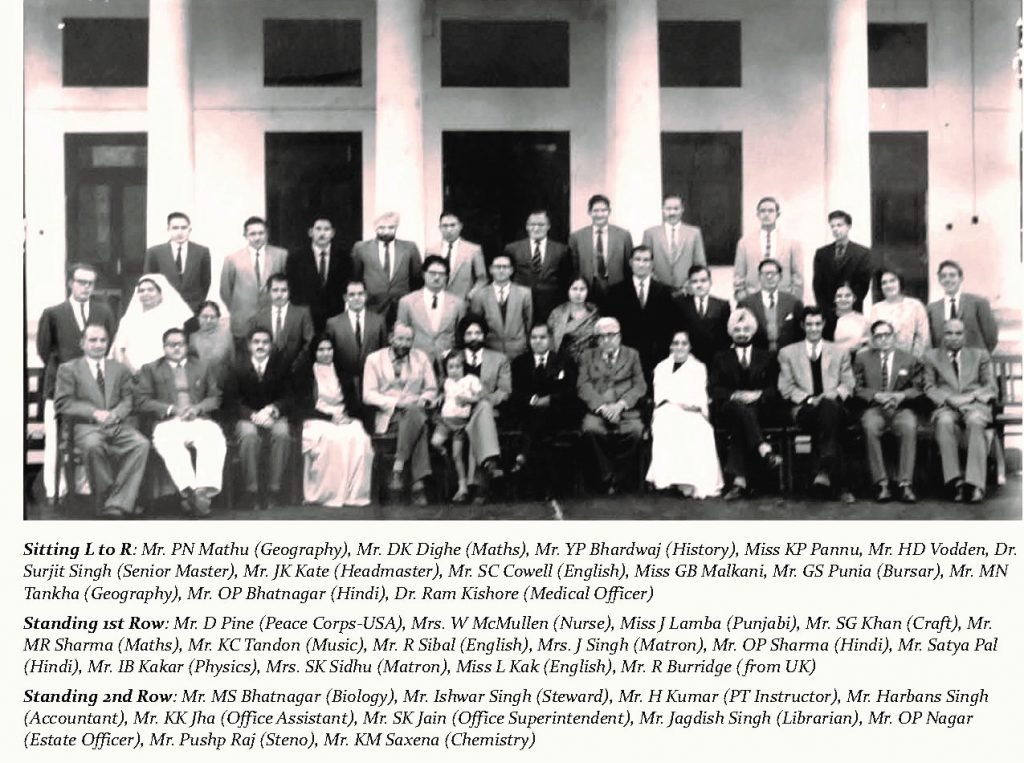 In the class room Miss Malkani taught us English. She took pains to teach each and every child in a manner that, he would not ever feel that he doesn’t know as much as his classmates (a few), who came from English medium schools. In a matter of a few months every student was speaking English almost at par. I have yet to come across another teacher who had so much dedication and devotion to her job as she had, of course the other Junior School teachers all young ladies and a few  males Mr Tandon and Mr Pine, were also dedicated to the core.

Mr Pine who was a Peace Corps Volunteer from America, was instrumental in teaching most of us swimming at the canal and then getting the swimming pool started. I remember the first day we went running to the canal and there off went our games rig. Some got into the water and boys like me sat on the banks with legs hanging in the water as I did not know how to swim. I don’t know when I was picked up by Mr Pine and thrown into the middle of the canal. It was a natural instinct that made me peddle to the bank and climb out huffing and puffing. Mr Pine takes me in his arms and says,” Bikram see you know how to swim so don’t sit out any more”. This was a pleasant discovery for me too. Before I could really get my bearings, I was back in water and once again peddling myself to the bank. Later he taught me various strokes like free stroke, back stroke and breast stroke etc. This was a great way to teach swimming. After that one always enjoyed going for a swim to the canal. 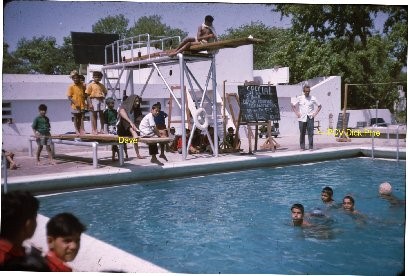 The Swimming pool where many of us learnt to swim and excel.

Soon the digging of the swimming pool in the Junior School started and in a year’s time it was ready. Mr Pine took life saving classes during the swimming periods and taught us how to save drowning persons. He was also instrumental in starting a poultry farm in the school which was good for practical teaching and gave us eggs for breakfast. Those were the days which one enjoyed playing and learning in a very friendly and free atmosphere which made us succeed later in life.

Home-day-eve-supper took place on the evening of May 14th and the School bid farewell to Mr.Richard Pine who had completed his term. Richard Pine, popularly referred to as “Dick Pine” played the lead role in laying a strong foundation of swimming in the School. He was so enthusiastic about Swimming that Mr.Kate had given him complete charge of the swimming pool. He also inculcated the habit of bird watching among the students of junior school that ultimately led to setting up an Aviary, which continues to adorn the Junior School. 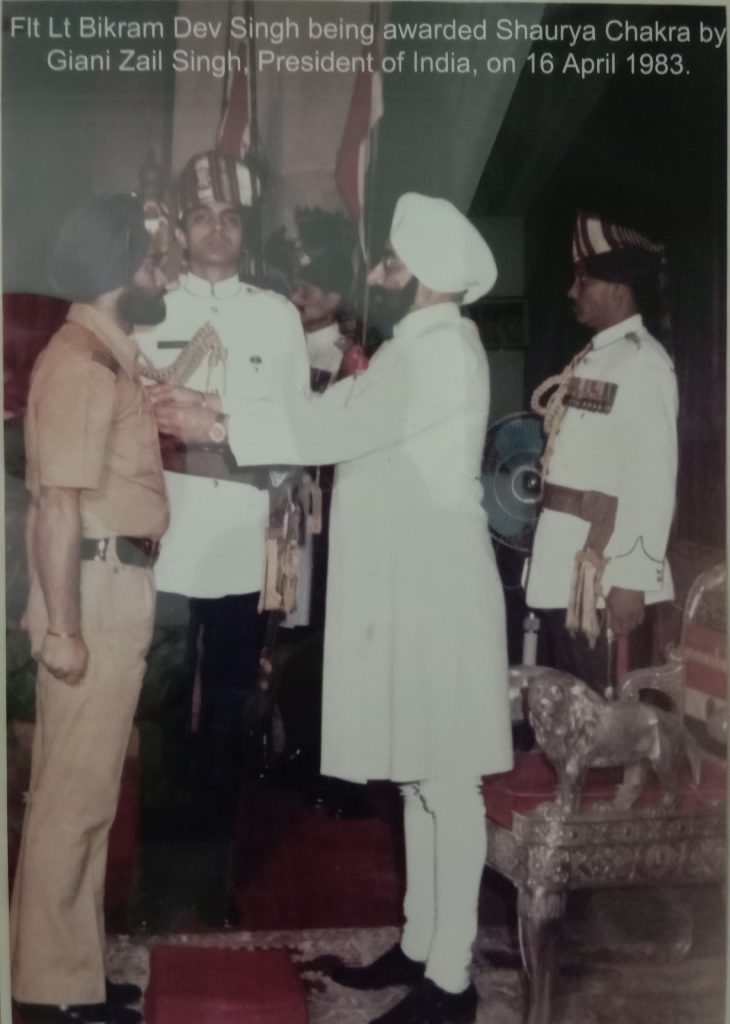 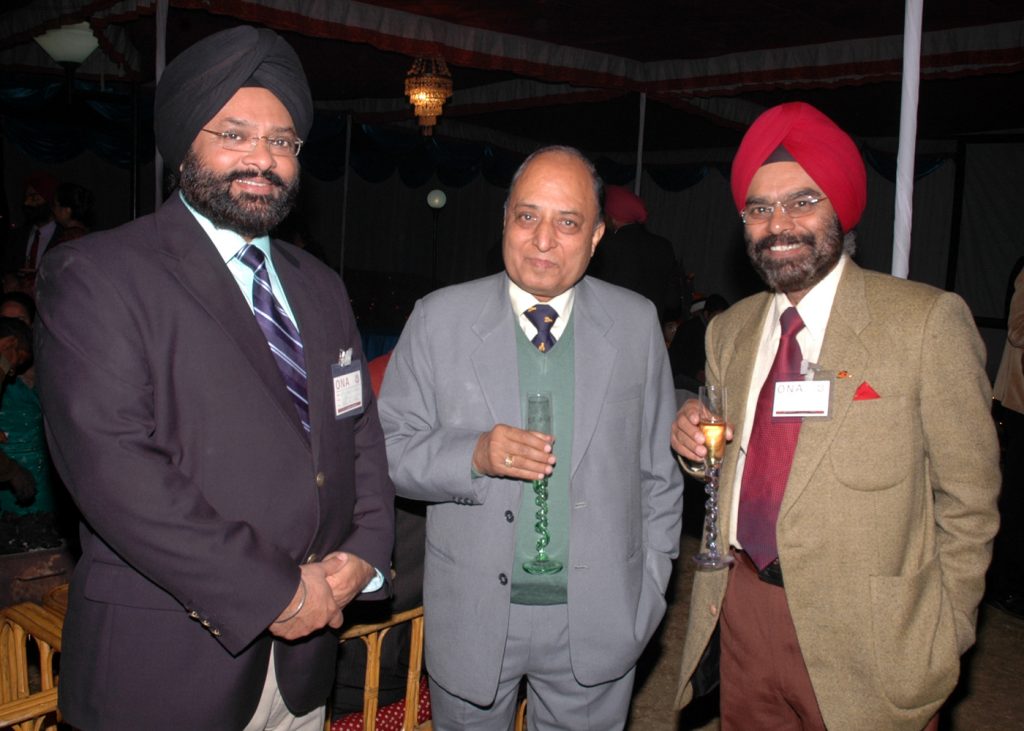 « Previous article
"A TRYST WITH PANDIT JAWAHAR LAL NEHRU" Next article »
"THE INEVITABLE!"