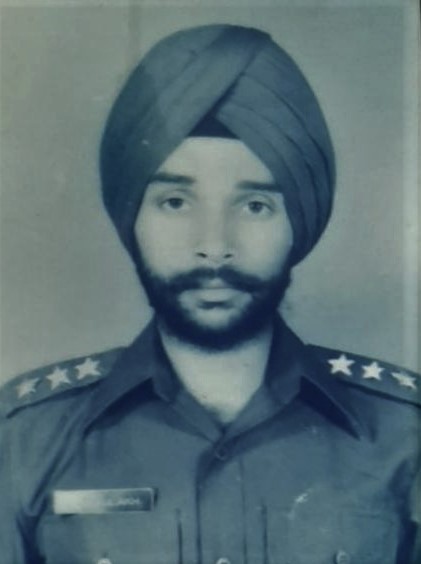 Capt Harjeet was performing his duties in an area which is snow bound throughout the year and temperature goes down to minus 40 degrees to 50 degree C.  On 27 Nov 84, enemy resorted to unprovoked Artillery shelling on our troops.  Capt Harjeet, being from Artillery himself, and located in that area, volunteered to retaliate.  In order to observe the enemy he was required to climb to a peak 20,000 feet high.  He was advised not to take this risk.  Brave, young, energetic as he was, undeterred by this Herculean task, he, on 28 Nov, started climbing the peak.  He found that he was ill equipped to cross huge crevices and returned to his base.  On 29 Nov 84 morning again, with six mountaineers and full equipment, at about 8am, he resumed climbing with renewed determination.  When he was just about 50 yards short of the peak from where he had decided to shoot at the enemy, he was observed by them who were about five hundred yards away.  At about 10am they started heavy shelling.  Capt Harjeet continued advancing regardless of his life’s safety.

Enemy shelling triggered off an avalanche.  It happened to be as big as 60×40 feet and about 4 feet deep.  This swept Capt Harjeet and five others into a crevice about 200 feet deep.  Only one mountaineer was thrown away on a ridge and his ice-cutting axe got stuck in the mountain.  He remained unconscious for sometime and when he regained consciousness, realized the situation and reported at the base about 12.20pm.

Immediately, mountaineers and helicopters, which were readily available, swung into action for rescue operations.  They continued the search till late in the evening.  Rescue parties, with the help of ropes, ladders and torches went down into the crevices but could not trace them.  On 30 Nov morning these search operations were started again and continued till noon when another avalanche of similar magnitude came.  These parties were then forced to abandon the search.  It was then considered that after the burial of the bodies for such long duration, there could be no hope of anyone’s survival.

Capt Harjeet displayed a very high sense of duty, which was much beyond the call of his duty.  Regardless of his personal safety in the face of enemy, he has set an example of courage and bravery for the generations to come.  He gave the supreme sacrifice for the honour of the nation and became a “SHAHEED”.

Although it is a matter of great sorrow, yet, we salute you for being a father of this brave officer and an inspiring soul.  India is proud of him.

He is being recommended for the highest gallantry award of the country.  We are trying our best that his sacrifice is recognized by the nation.

A Letter From The Commanding Officer 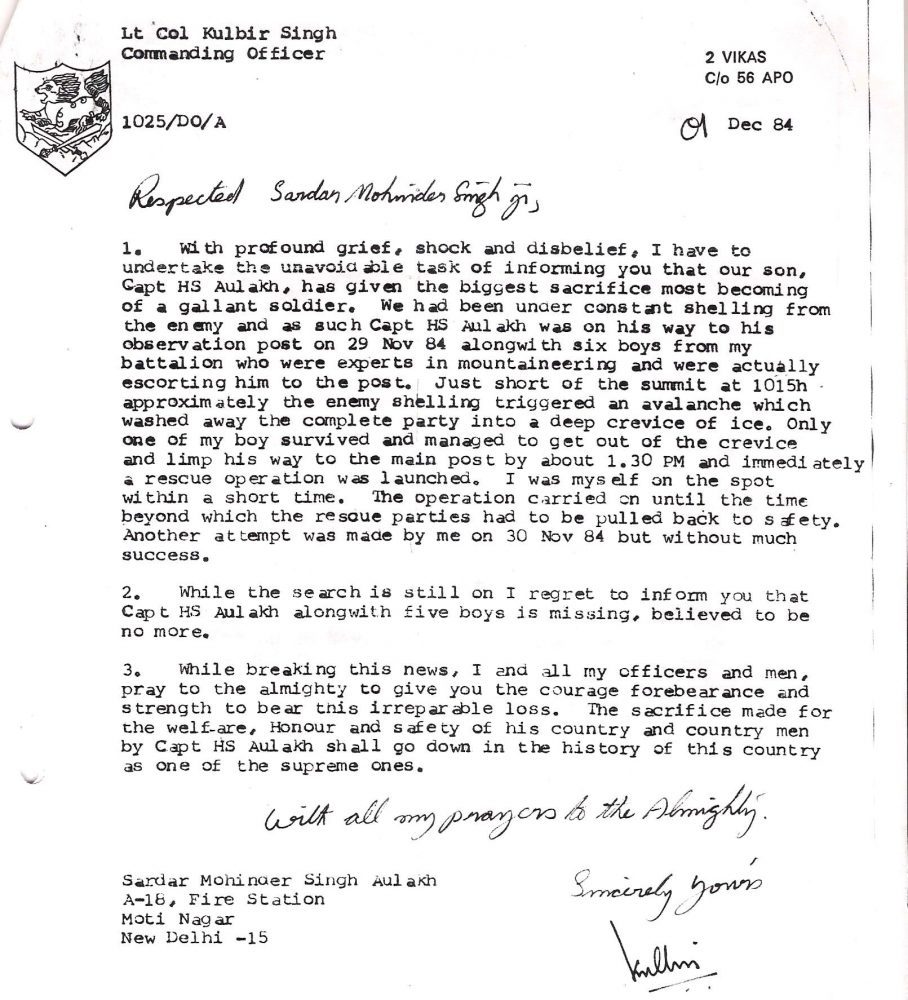 The families of the ‘Bravehearts’ of The Punjab Public School were honoured in the School Auditorium with School authorities, staff, Old Nabhaites and students in attendance.

The first part of the morning session was conducted by Naveen Talwar (S-71), President, ONA.  He focused his address on the students passing out of PPS.  The thrust of his talk was that ONA was not just a simple association of individuals but it signified an association of individuals with a particular spirit inculcated in them while in PPS.  He gave numerous examples of the spirit of bravery shown by Old Nabhaites when duty called.  Whether it was Rajwinder Cheema (R-8), Capt Manjinder Singh Bhinder (R-505,1984), Capt Harjeet Aulakh (S-297,1978), Harpreet Mand (B-137,1969), Maj Harpal Singh (R-173,) or DSP Rupinder Teja (J-139,1971), they all exhibited the finest qualities that can be asked of an officer.  They all became martyrs to noble causes.  This is the type of spirit Old Nabhaites possess and the ONA is an association of such people.

The last part of this session was dedicated to honouring martyrs Harpreet Mand (B-137) and Capt Harjeet Singh Aulakh (S-297)’s families.  The citations were read out by Naveen Talwar (S-71) whereas Kanwar Sandhu (J-106) and MS Bedi (J-82) honoured the families with plaques, which read, “The Old Nabhaites Association is proud of the achievements, dedication, commitment and sacrifice made by Capt Harjeet Singh Aulakh /  Harpreet Mand.”

Capt Harjeet Aulakh (S-297)’s father made a short but touching speech saying that his son could have died due to sickness or any other cause but they were proud that he had died for his country.  He said death was something which lay in the hands of “Waheguru”. 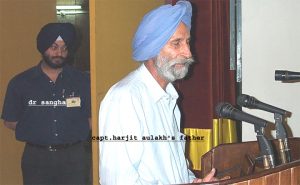 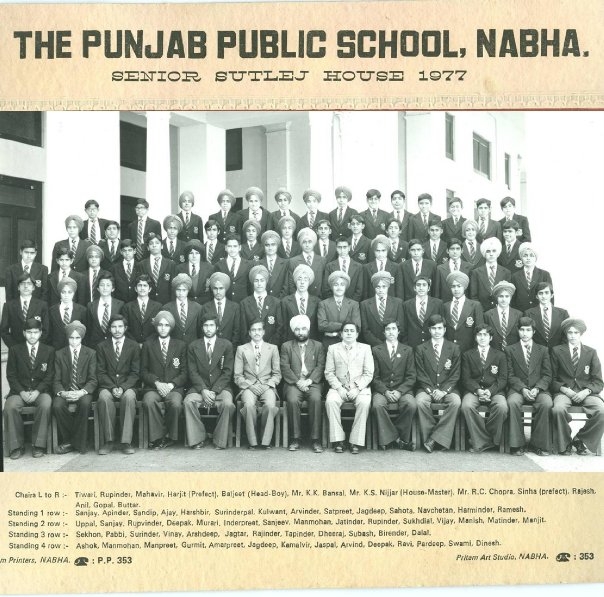 The picture on the left shows Harjit’s father speaking to audience on the ONA Day 2001. The picture on the right shows 1977 Satluj House, Harjit (Prefect) is sitting fourth from left ,to his left is headboy, friend house mate and team mate in multiple schoolteams Baljit Uppal(S-300)

Sentiments of a not so sentimental ON

( Who was the most successful in the batch?)

Harjeet S. Aulakh (S-297) was my classmate and a very good friend.

Two years ago a few of my classmates met for a party at my place and some one said he wondered who among our batchmates (1976 batch) was the most successful till date.

Many names came up. Baljit Uppal (S-300) (a successful LA dentist then) gave the most memorable answer.

He said in his opinion Harjit was the most successful since he had already lived and died for his country while we others were all still trying to make our mark for the posterity.

Indeed those names mentioned above by you are the most successful ones while we are still struggling for the answer to the question as to what constitutes success.

I am a grown man and not very sentimental one, but it is very hard for me to remember my buddies like Harjit and Baljit without getting moist around the eyes. 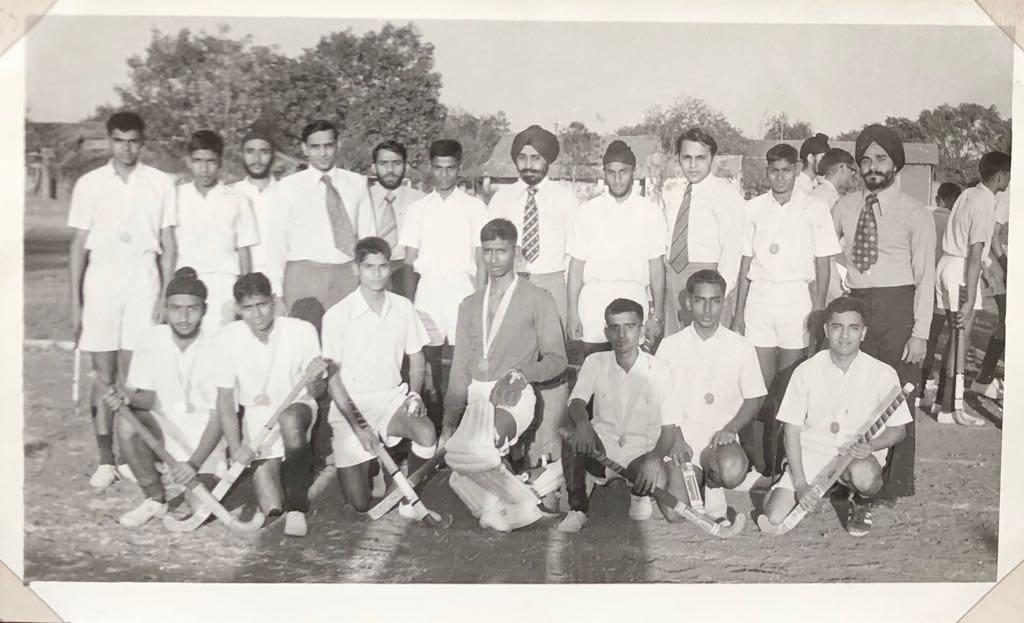 Harjit a very good sportsman seen in two different Army Hockey teams. Standing third from left in one and fourth from left in the other.