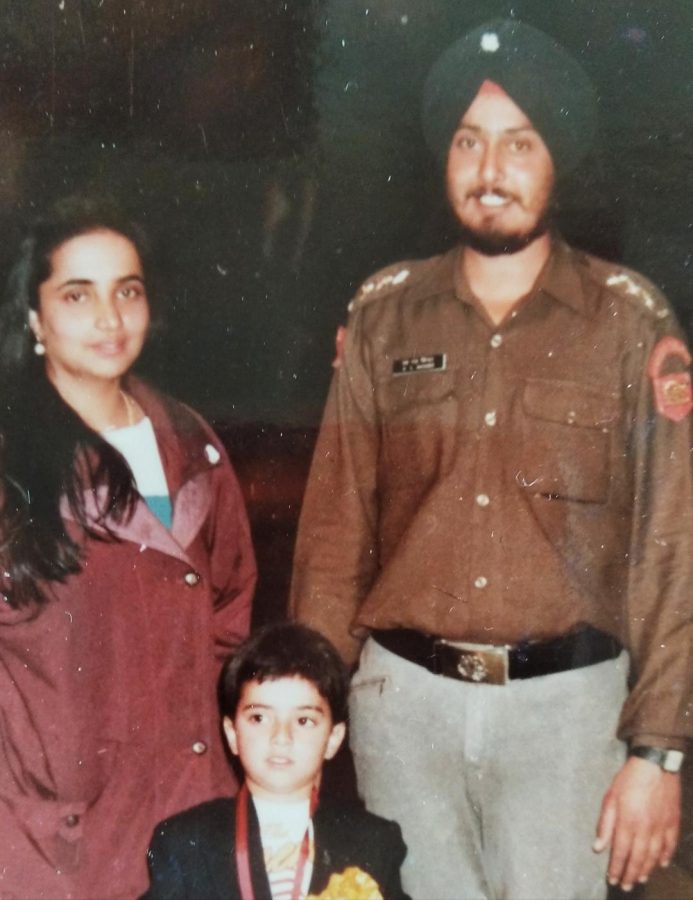 Captain Manjinder Singh Bhinder (R-505, 1984) was an outstanding sportsman and rider in his school days. He had won a string of awards in the school. He was Duke of Edinburgh’s Award winner, attaining the Silver standard and bagging the Best Rider’s trophy for the year 1982-83.

He was Captain of the Riding and Polo team of the NDA in 1990.

He was Captain of the Riding and Polo team of the IMA in 1991. 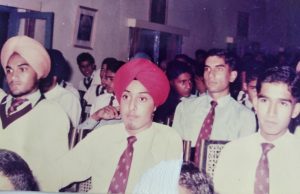 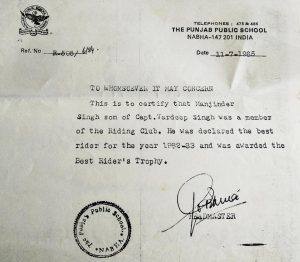 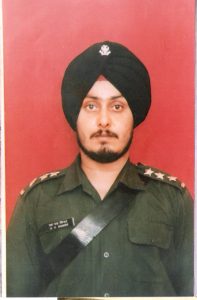 Pictures show Bhinder as in school, a best rider certificate issued by the School and a portrait in uniform.

After commission, he again as senior, won innumerable awards in different aspects of riding in equestrian competitions, held all over India, every year, till his tragic demise. He was the best rider at Bangalore National games winning three Gold, one Silver and a bronze medal.

He was to represent India in Asian Games at Singapore. Unfortunately, he met with his tragic end, before the Games. 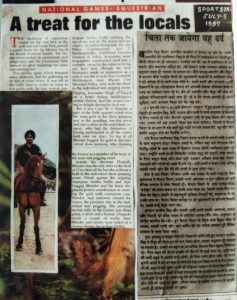 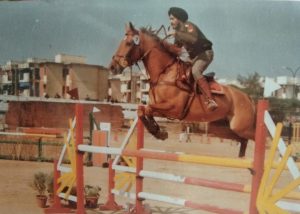 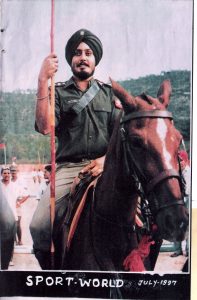 On the 13th June, 1997 Capt Bhinder with his wife Jyot-Roop and four years old son Ruskin, went to see the film “Border” in Uphaar Cinema in Green Park area, New Delhi. While the movie was on, the Hall caught fire. With poor fire-fighting equipment and exit arrangements, people got trapped inside. Bhinder sent his friend Capt. Pattu to get outside help, while he decided to stay inside, to help the frantic crowd keep calm and take them out gradually in order.He helped many to safety. Unfortunately, he himself and his family succumbed to the tragic death that was the fate of many who were trapped inside, as it became difficult to get proper help.

In the Year 2000, The ONA honoured Braveheart families of The PPS in the School auditorium. Capt MS Bhinder’s parents and family were invited.  His father Retd. Capt. Vardip Singh Bhinder addressed the audience. 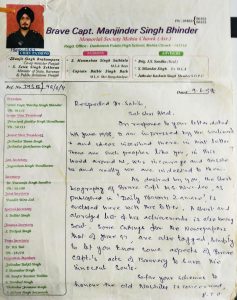 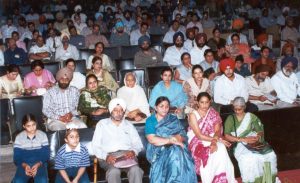 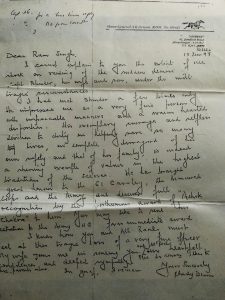 With profound grief we record the sad and sudden demise of Captain M.S.Bhinder (Ex R-505) on 13th June 1997. Capt. Bhinder died a heroic death in the fire that broke out at the Uphaar Cinema in Delhi. Tragically his wife and four year old son were also among those killed. Captain Bhinder was a keen horse rider in his school days and was adjudged the best rider in 1983. He had taken part in many national events and was a member of the gold-winning equestrian team of Delhi at the National Games.

Captain M.S. Bhinder, who had won three gold medals, one silver and a bronze in the equestrian events at the just concluded National Games in Bangalore, passed away tragically in the fire at Delhi’s Uphaar cinema on Friday, June 13.

Capt. Bhinder, who represented Delhi, was the only rider to have participated in all the disciplines (show jumping, eventing and tent-pegging).  He won medals in all these events and did especially well in show jumping in which he gabbed the gold on his horse Pharoah, from a field of 33 of the country’s best riders.

After his record-breaking medal haul Capt. Bhinder was looking forward to the Asian Games next year for which he was no doubt a medal hope for India.

He and his much-loved horse Pharoah had achieved a great rapport and record of success.  He had won medals in the National Championship in Bombay earlier this year too.

Capt. Bhinder was a wonderful person, a good soldier and a terrific sportsman.  He was very popular among all officers and riders around him, always offering advice and support.  In his small world he was a great source of positive thinking.

Even at the end, he sent his junior officer Lt. Rajesh Pattu out of the smoke to try and bring help but himself chose to remain where the danger was.  He wanted to save the frightened women and children trapped inside.  His last words to Lt. Pattu were that he had to keep the helpless calm and try to guide them all to safety.  Thus Capt. Bhinder, a trained officer who could easily have made an individual escape sacrificed his own life, for not only his wife and son but all the others trapped.

He is survived by his father Sarda Vardeep Singh (retired army personnel), his mother and three sisters.  The bodies will be taken to their home in Punjab for cremation.

The Indian Olympic Association on Saturday condoled the tragic death of Captain Bhinder.

In a message, IOA president Suresh Kalmadi expressed shock and regret that the country had lost an outstanding rider, with his wife and young son. Capt. Bhinder had a great sporting career ahead of him, which has been cut short, and our heart goes out to be bereaved family, Mr. Kalmadi said.

The IOA secretary general Randhir Singh termed it a great tragedy.  He was one of the top all-round riders and his loss would be felt by the sports fraternity, he said.

The Delhi Olympic Association also expressed condolence at the death of Capt. Bhinder who had brought laurels to the state.

A SOLDIER IS NEVER OFF DUTY (The Court deicdes..)

Remembering CAPTAIN MANJINDER SINGH BHINDER of the 61st Cavalry, who selflessly saved over 150 lives this day in 1997, when a raging fire broke out in the #Uphaar cinema in New Delhi. Even after he realised that his four-year-old son, Ruskin and wife Jyot-Roop were engulfed in the inferno and could not be saved, Capt Bhinder jumped back into the fire and took charge like a true Army officer to guide panic-stricken women and children through the dim-lit and narrow stairway to safety, till flames engulfed him. Indian Army lost one of it’s finest officer and rider. He had just won the National Games equestrian event in Mysore and considered a strong prospect for the 1998 Asian Games.

The story doesn’t end there. Parents of Capt Manjinder Bhinder had to fight #Ministry of #Defence babus for the pension they were entitled to, who hung on to the technicality that Capt Bhinder had not been fighting enemies. He was fighting fire even while the army had declared his death “attributable to military service”. It was overturned by the accounts department. After seven years of litigation, the Delhi High Court told the #MoD that a #soldier is ON DUTY ROUND THE CLOCK, and ordered a special family pension for Manjinder’s parents.
Octogenarian, Capt Vardeep Singh (father) said that the family had no need of money. “That was made clear the day we told our son to give up the idea of becoming a doctor, and serve the nation by joining the Army. We are hurt and humiliated because the Union government did not recognise Manjinder’s bravery despite his saving 150 lives. He was my only son.”

It has taken three years for the Army to admit before the Delhi High Court that the death of Capt Manjinder Singh Bhinder, who perished in the Capital’s Uphaar cinema fire tragedy along with his wife and son after saving over 150 persons, was “attributable” to Army duty.

This has been admitted in the report of the Army’s court of inquiry into the death of Captain Bhinder, who fell victim to the fire tragedy on June 13, 1997, with his wife Jot Roop and 4-year-old son Ruskin after he had helped in rescuing more than 150 persons trapped inside the theatre.

Army’s counsel Rekha Palli, however, sought more time from the court to make its stand clear whether Bhinder’s father will be entitled to special family pension as he himself was a retired junior commissioner officer and getting pension.

A Bench comprising Mr Justice D. K. Jain and Mr Justice Madan B. Lokur, while perusing the court of inquiry report had observed that the death of Bhinder was attributed by it to have been caused as part of Army duty. The judges, however, took a serious view of the Army taking three years to clarify this to the court.

The court had on February 10 directed the Army to place before it the report of the court of inquiry to show as what view it had taken on Bhinder’s death.

The Chandigarh-based All-India Ex-Servicemen Association had filed public interest litigation (PIL) in the high court three years ago, seeking grant of family pension to Capt Bhinder’s 71-year-old father Vardip Singh.
The association had contended that Bhinder was fully entitled to family pension as he had sacrificed his life while saving many people without caring for the safety of his wife and son, whom he could have easily saved.
The Army authorities had in its affidavit submitted that Bhinder was not entitled to special family pension because his death had not occurred on official duty, though they had admitted that he had taken steps to control and guide the mob at the time of the fire and tried to save the lives of several people.

He was not on “bona fide” military duty at that time and his death was “classified as physical casualty”, the Army’s affidavit had said.

Bhinder, a native of Mehta Chowk in Punjab and then posted in Delhi, had gone to see the movie “Border” in the Uphaar cinema with his family when the tragedy struck in the afternoon, in which 59 persons were killed and 104 injured.
,br>

Association’s counsel R. K. Saini and Bhim Sen Sehgal had said Bhinder’s action indicated that he had shown true sense of Army duty as was expected of a true soldier in such a situation.

Denial of family pension to his kin would be a great injustice to him and amount to “derecognising” his service to the society, they argued.

The horsemen of the army (61Cav)

One of its late officers, Captain Manjinder Singh Bhinder will be remembered for selflessly saving the lives of 150 people on 14 June 1997, when a raging fire broke out in the Uphaar cinema in New Delhi, which had caught fire. For Bhinder, who died with his wife Jyot-Roop and four-year-old son Ruskin in the inferno, seeing the film, Border, was supposed to be celebration time with teammate, then Lieutenant Rajesh Pattu after their spectacular performance in the National Games equestrian event in Mysore. Bhinder, considered a strong prospect for the 1998 Bangkok Asian Games, took charge after the fire broke out, like a true Army officer to guide panic-stricken women and children through the dim-lit and narrow stairway to safety, till he succumbed.

« Previous article
"DINING WITH THE CHAIRMAN!" Next article »
"A Tribute to The Punjab Public School by Dr.Mohan Chutani (R-241,1975) on it's Diamond Jubilee"