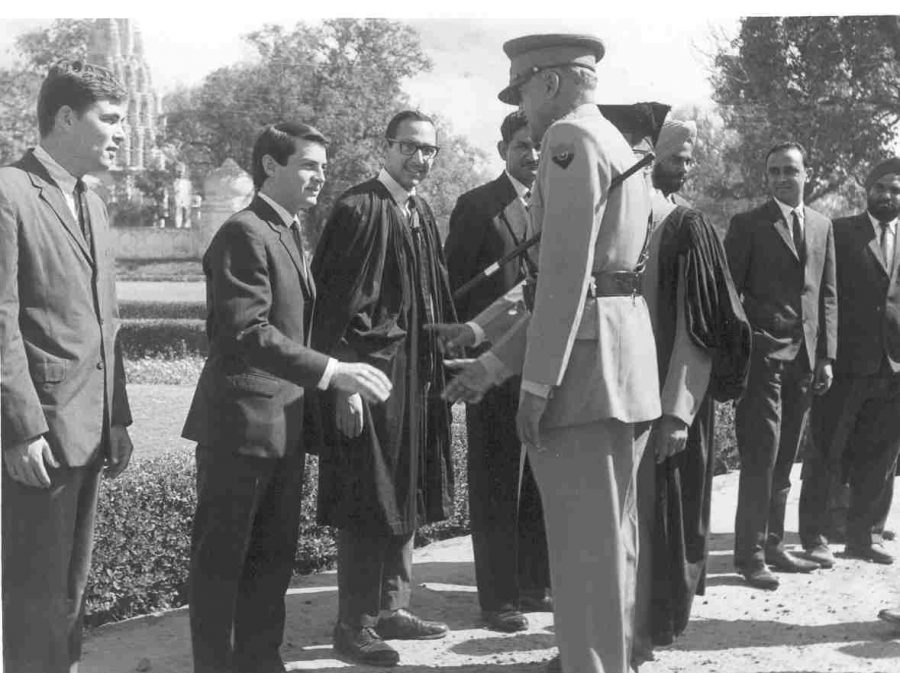 Mr. David Goldberg was an American Peace Corps Teacher in the School between 1964-66. In the picture he is seen with specs waiting to be introduced to Gen JN Chowdhary, COAS in 1965.

In the 60s, many American Peace Corps workers were attached to The PPS.  They greatly influenced the students of those days mainly for two reasons.  One, the school was based on the British system of Public Schools and these Peace Corps workers brought a new and refreshingly informal American influence.  Secondly, they all took up some activity in School, which benefitted both the children and the school.  Steve Power set up the piggery and the poultry form, which is now the stable for horses.  Dick Pine was responsible for the swimming pool and taught “drown proofing” and “life-saving” apart from basics of swimming.  Lowell Edwards taught Maths with an American approach.

One of the most impressive and irrepressible Peace Corps workers was Mr. David Goldberg, who taught English.  After Mr. Dick Pine , he also became in-charge of the Swimming Pool, which he handled with his “‘psycho” bat, to keep the errant boys in discipline. He was a tall bespectacled man with feet so big that no shoe manufactured in India fitted him.  His footsteps could be heard long before he reached the classroom.  He did not like to be addressed as sir.  He hated our standing up in the class when he entered.  When we would almost sing “Good Morning, Sir”, he would run out of the class with his hands on the ears.  He often had small tiffs with teachers of British descent (up tightness versus informality).  While in school, he developed a weakness.  He fell in love with the great Indian “poorie” served for breakfast on Sundays.  This was also something to which his intestines revolted against.  He would develop diarrhoea after imbibing a sumptuous meal of “poories”.  But love hath no reasons.  It was very common to see Mr. Goldberg up there in front of the dining hall waiting to devour the “pooris” at breakfast on Sunday mornings.  What followed was also a common sight.  After breakfast, Mr. Goldberg, knowing the consequences, would be seen heading straight for the MI room holding on to his tummy and that is where he would spend the rest of the Sunday under the care of the matron Mrs. McMullen.  Fortunately, the MI room was and is very close to the dining hall.